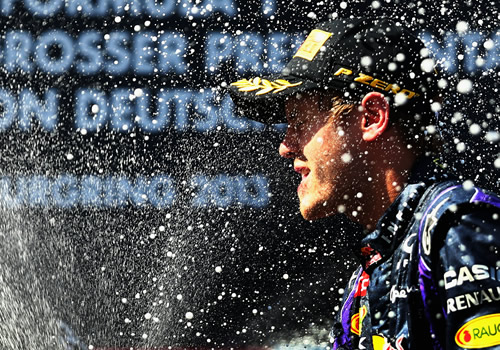 10) Paul di Resta (Force India-Mercedes) 36 points
Felt aggrieved late last season when he was overlooked for a move up the grid, but now with hindsight, he will surely appreciate one further year at Force India. The results and overall performance continue to impress and barring a few qualifying blips, it has been an excellent 2013 so far, but can he continue the form and end the year on a high unlike last season?
Grade: B

9) Jenson Button (McLaren-Mercedes) 39 points
One of the drivers you just have to feel for. Having proved himself as a more than adequate team-mate to Lewis Hamilton, he was in no doubt hopeful of a strong 2013 following Hamilton’s move to Mercedes, and the subsequent promotion to de-facto team leader. Unfortunately, the Briton’s MP4-28 has been a mare to drive. Despite this, he has remained admirably level-headed given such a tough start to year, and it here where he deserves any credit that comes his way.
Grade: C

8) Romain Grosjean (Lotus-Renault) 49 points
Try and compare Grosjean’s results to those of his team-mate. You can’t. The Frenchman continues to show his moments and has reduced the amount of race-day collisions, but with conservative driving, comes unspectacular results. A marked upturn in form will surely be required to save his seat for next season.
Grade: D

7) Felipe Massa (Ferrari) 61 points
Compared to last season, the Brazilian’s form has been a marked improvement, but overall, doubts remain as to whether or not he’ll be retained by the Scuderia next term. Rediscovering his early-season form will no doubt help, but with persistent rumours concerning an overhaul at Ferrari for 2014, it continues to look like his days are numbered.
Grade: C

6) Nico Rosberg (Mercedes) 84 points
Began the season incredibly well in the wake of Hamilton’s arrival at the team and come Monaco, the German had two victories to Hamilton’s zero. At that point, it looked as though his upper hand on Hamilton was beginning to tell, but in a surprising turn of form, it has been the Lewis show at the Silver Arrows since. A response will be needed in the next two races, lest to avoid a lame duck end to the season, in which Hamilton will receive team preferences to aid any potential title charge.
Grade: B-

5) Mark Webber (Red Bull Racing-Renault) 105 points
Only one word is needed to sum up the Aussie’s opening half of the season: unfortunate. Outperformed by Vettel, the Australian’s decision to quit the sport in favour of Le Mans came as little surprise given how Red Bull’s position and stance on Vettel would have demoralised even the finest of drivers. One can only hope he can finish off his Formula 1 career on a high with a few more podiums or even a victory, but the odds are against him at this early stage.
Grade: C

4) Lewis Hamilton (Mercedes) 124 points
More than half the paddock questioned the Briton’s move to Mercedes late last year, and how they have been forced to eat their words. Hamilton’s form, in spite of some race-pace issues, has been exemplary, and despite issues off the circuit, he continues to look as relaxed as ever now that the shackles of McLaren’s often questioned management system have been removed from his shoulders. A title charge may look just beyond him this time around, but he will be worth an early flutter to succeed in 2014 without question.
Grade B

3) Fernando Alonso (Ferrari) 133 points
Is this to be yet another year that a Formula 1 world title eludes the Spaniard? At times it’s hard to believe that it’s now eight years since Alonso’s heyday at the wheel of a Renault. Alonso isn’t happy, Ferrari likewise – to the point of President Luca di Montezemelo giving his driver a reprimand for his outspoken behaviour. Ferrari have sacked drivers in the past for publicly questioning the team’s direction, and this reprimand earlier in the summer showed how highly the Spaniard is regarded in Maranello, but is the double world champion prepared to wait?
Grade B-

2) Kimi Räikkönen (Lotus-Renault) 134 points
Second place, and only 38 points behind Vettel with only one victory from the opening round in Melbourne just about sums up the Finn’s stunning consistency since his return to the sport over a year ago. Unfortunately for Räikkönen, his Lotus still continues to lack an overall package that would enable him to bridge the gap to the top of the leader board. Upgrades are expected for the final stint of the season, but it may once again be a case of too little, too late.
Grade B+

1) Sebastian Vettel (Red Bull Racing-Renault) 172 points
More than half his points have come from the four race victories he so seamlessly took in his stride. Title number four is more-than within his grasp at the halfway stage thanks to a string of podiums and only one retirement in the opening ten races. Barring any complacency from his Red Bull team, it should be his come November – but nothing from behind can be ruled out at this stage.
Grade: A