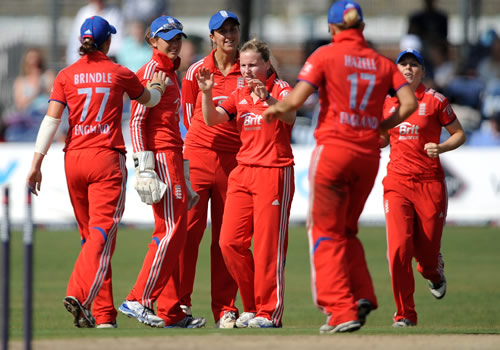 England claimed a five-wicked win on Sunday Photo: Getty Images for the ECB

England claimed a five-wicket victory over Australia in a 36-over rain-reduced third one-day international, in the Women’s Ashes series at Hove.

Australia posted a healthy 203 for four after Anya Shrubsole wasted little time in removing Alyssa Healy and a partnership of 50 between Meg Lanning and Jess Cameron ended when the latter was superbly stumped by Sarah Taylor off Danni Hazell.

Lanning was bowled by Holly Colvin for a 69-ball 64 before Taylor produced an even better piece of work, to dismiss Australian skipper Jodie Fields. Ellyse Perry and Alex Blackwell added an unbroken stand of 77 that spanned the final 10 overs of their innings as Australia posted 203 for four.

England then set about the run chase and despite the early loss of Charlotte Edwards, Heather Knight and Taylor shared a 126-run partnership off 112 balls, the highest second wicket partnership for England against Australia. Both recorded half-centuries, with Knight’s taking 53 deliveries, while Taylor’s used up 47. Knight eventually fell to Osborne for 69, leaving England 67 runs short of success.

Taylor soon followed for 64 that included six fours and Arran Brindle was run out for 11, but Natalie Sciver and Lydia Greenway took England to the brink of victory.

Osborne struck for a third time to remove Greenway for 18 as she went for a six that would have secured victory, which was wrapped up in the next over as Perry bowled a wide to Jenny Gunn. England reached their target with 16 balls to spare.

The result leaves England leading 6-4 with three international T20 contests left to play as they seek to regain the Ashes.

Taylor said: “We spoke about being positive from ball one and with targets like that you’ve got to put the ball away if it’s in your area. It was brilliant to bat out there with Heather and to contribute to the win.

“I couldn’t believe that ball stuck in my glove, I saw it coming and just dived to stop it and get something on it and it just stuck, I think that’s got to be the best catch of my career so far.

“We came down here wanting to level the series and then go on and get ahead which we’ve done today>But we’ll be looking ahead now and planning for the Twenty20s which I’m sure will be exciting when they all start in Chelmsford on Tuesday.”