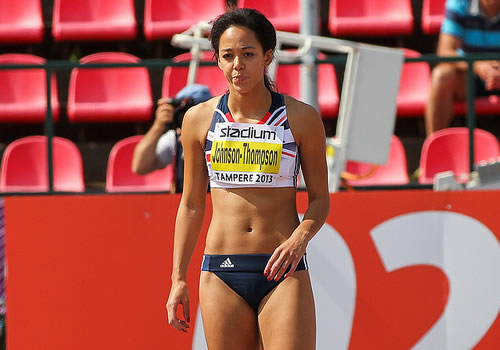 Katarina Johnson-Thompson confirmed her arrival as the next big thing in British heptathlon after coming within a whisker of a medal on her World Championship debut in Moscow.

The 20-year-old produced a huge personal best of 6449 points to finish in fifth place, only 28 shy of bronze and just 20 points short of Olympic champion Jessica Ennis-Hill’s British under-23 record.

Going into the final 800m event needing a personal best to stand a chance of breaking into the top three, she recorded one after crossing the finish line in 2:07.64minutes but it was not enough.

Ganna Melnichenko raced away with gold while Brianne Theisen Eaton took silver with Dafne Schippers of the Netherlands claiming bronze in Moscow with a total of 6477.

Johnson-Thompson had targeted just a place in the top eight in Russia but insists she will be aiming a little higher when she next meets the world’s best on the biggest stage.

“I’m over the moon with how it went, I’m delighted with how I performed,” said Johnson-Thompson, who still has two years to break London 2012 gold medallist Ennis-Hill’s under-23 mark.

“Basically ever since the 200m I have had four personal bests and I can’t really ask for more. Getting past 40 metres for the first time in the javelin has got to be the highlight for me.

“I thought this was a good chance and I’m so pleased to have brought it out the bag. I almost regret a bit that I didn’t target a medal because I would have believed in myself a bit more at the start.

“It’s weird to think that I can target medals if I just sort out my throws, all I really wanted was top eight, a progression and a personal best so I cannot complain.”

Elsewhere Perri Shakes-Drayton looks in good shape to continue the British medal rush in the 400m hurdles after advancing to the final as the second fastest qualifier.

Joining her there will be fellow Brit Eilidh Child whose third-place finish in her semi-final was good enough to secure automatic qualification to her first world final.

Shakes-Drayton will also contest her maiden global outdoor final and she admitted it was nice to have buried the demons of last year when she just missed out on the London 2012 medal showdown.

“I feel good, I had to make the final before I can think about anything else,” said Shakes-Drayton. “Anything can happen in the final, I have done the qualifying bit and that is a real relief.

“It’s so draining both mentally and physically, even out there lining up for the race at one point it came into my head, the memories of London but I had to put that behind me.

“This is the first top-level final that I have made and I have two days to relax and look after myself now.”

There was bad news for Britain’s men in the 400m hurdles however as defending world champion Dai Greene, Rhys Williams and Sebastian Rodger all went out in the semi-finals.

And Greene, who has been hindered all season with a variety of injuries and illness including a hernia and a calf problem, admitted he was struggling from the get-go.

“It was very lacklustre from the start, I was struggling to get the intensity up in the early stages of the race,” he said.

“The intensity levels are so difficult to get up, that’s what I’ve been missing in the last few weeks and it showed out there.”

Meanwhile Andrew Osagie finished fifth in the 800m final while Hannah England, who won world silver two years ago, is safely through to the 1500m final.

England was fifth in her semi-final and admitted afterwards that she is coming into form at just the right time in Moscow.

“It feels good to have put two good races together in two days, that is great to have under your belt and I’m looking forward to going out and giving everything in the final,” she said.

And finally Eilish McColgan, who broke the Scottish record in her heat on Saturday, had to settle for tenth in the women’s 3,000m steeplechase final.