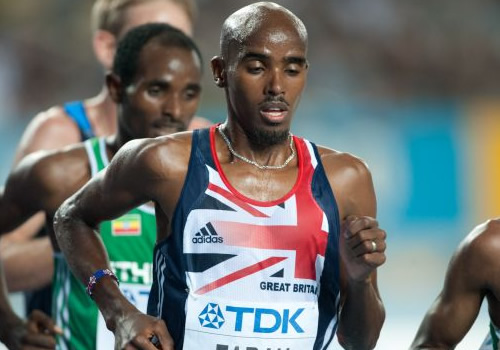 Mo Farah produced a performance of gutsy brilliance to cement his place in the pantheon on British athletics legends in Moscow.

Farah – according to another double Olympic champion Seb Coe – is now the greatest British athlete of all-time after he claimed his fifth global title in two years with a victory in the 5000m at the World Championships.

The win retained the title he won in Daegu and means the 30-year old now holds the double, double – as a world and Olympic champion over both 5000m and 100000m.

It’s a feat that only the legendary Kenenisa Bekele, the triple Olympic and five-times world champion, has previously achieved and Farah’s best days could still be ahead.

Farah’s rivals tried their best to challenge but he got his race tactics spot on, crossing the line in 13:26.98 ahead of Ethiopia’s Hagos Gebrhiwet and Kenya’s Isiah Koech.

The early stop, start rhythm was designed to confuse but Farah took to seized the initiative with four laps remaining to get the pace back into his comfort zone and, at that point, his odds shortened even further.

As the pace cranked up he repelled the advances of all-comers, kicking clear every time someone started to lurk menacingly on his shoulder.

Rounding the top bend, with the line in sight, he sprinted clear and there was only one winner.

“This was harder work than last year and I’ve put so much into it,” said Farah, who admitted surprise his rivals didn’t do more to make the race quicker.

“I never thought I would achieve something like this. It was so tough but thankfully I’ve come through it with another gold medal.

“I’ve worked so hard for this and I was just thinking about my kids and how much I’ve been away from them and I wanted this for them.

“I’ve been in and out of their lives for the last five months and I just can’t wait to spend some time with them now.

“I’ve had a lot of pressure on me but I enjoy it and I’m so proud to represent my country and hold the British flag.”