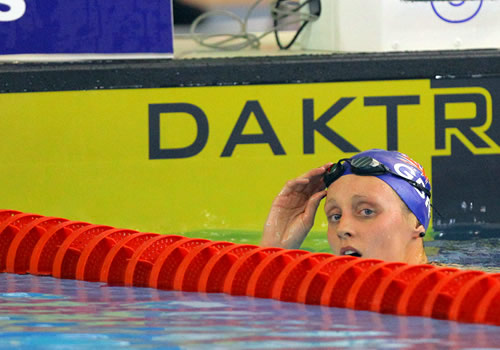 Fran Halsall delivered the medal Great Britain’s swim team had been waiting for after winning 50m freestyle bronze at the World Swimming Championships in Barcelona.

Not since 1994 had the British team left a Worlds empty-handed from the pool and Halsall ensured it would remain that way by finishing third in 24.30 seconds on the final night of competition.

It was to prove Britain’s only medal of the meet, matching their haul from the 1992 Barcelona Olympics but leaving them short of their minimum target of three.

For Halsall it was her first major medal since the 2010 Commonwealth Games and she admitted it helped make up for finishing fourth in the 50m butterfly.

“It was more me erasing my demons of 2011 and coming fifth at London 2012, I’ve had a lot of issues to contend with,” said Halsall, whose coach James Gibson won breaststroke gold and bronze at the competition in Barcelona ten years ago.

“It’s not easy when you have a new coach and you’re getting back into things and you’re still a bit disappointed with having an off year.

“I’m really proud of myself for stepping up, it’s not easy when you’ve come fourth and fifth and having to stand there.

“I’ve done it so many times, you always have that little bit in your mind.”

While Halsall took to the podium to break Britain’s duck there was still time for some more near misses, with Hannah Miley finishing fifth in the 400m medley.

“I’m fifth again but it is faster than what I did at the Olympic Games, so I can’t really complain,” she said.

“It is not really the result that everyone wanted and I hate disappointing people because it is a massive disappointment for myself to come away without a medal.”

Halsall was back in the pool for the 4x100m medley relay where she teamed up with Lauren Quigley, Sophie Allen and Jemma Lowe to finish sixth in 3:58.67 minutes.

Elsewhere, Dan Wallace, 20, lowered his lifetime best for the second time in one day to finish seventh in his 400m medley final, clocking 4.14.15mins in qualifying and 4.13.72mins in the final, while Dan Fogg finished eighth in the 1500m freestyle final in 15.05.92mins.