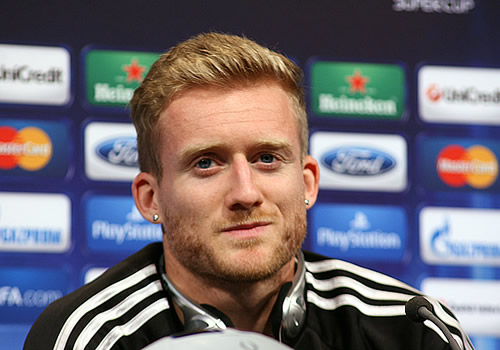 Andre Schürrle admits Jose Mourinho “demands a lot” from his Chelsea players but insists he is thrilled to be working under the Portuguese coach.

Mourinho returned to Stamford Bridge on a four-year deal earlier this summer, with 22-year-old Schürrle also arriving at the west London club in June after his move from Bayer Leverkusen.

And the winger has been hugely impressed by the Portuguese manager’s approach after his first few months in England.

“Our coach Jose Mourinho connects very well with us players,” Schürrle wrote on his blog on sportupyourlife.com.

“He demands very much, but he also teaches us so many things.

“He wants the success and you can feel this when you work with him. He’s always extremely focused, extremely detailed, but also works with a lot of fun. I enjoy training with Mourinho.”

The Germany international has made six appearances in all competitions for the Blues since his £18m transfer to Stamford Bridge.

And Schürrle is confident he has what it takes to break into the first team, despite intense competition for places at the club.

“All players are on a top level, the standard is pretty high,” he continued.

“Now I’m part of this team and I’ll work hard to bring my qualities to this team.

“Of course, the competition is really strong, but only this way you can keep on developing. I’m really excited about the new season with hopefully the maximum degree of success.”

Nicklas Bendtner will get his chance at Arsenal, says Arsene Wenger