Arsenal’s Yaya Sanogo vows to ‘toughen up’ for Premier League 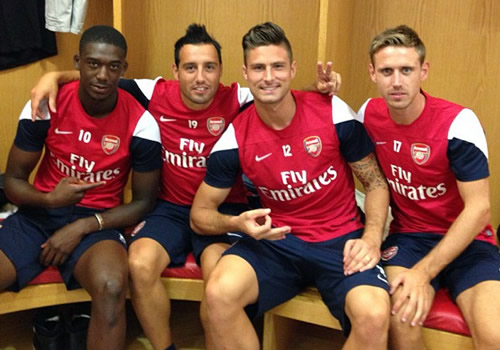 Yaya Sanogo insists he is ready to “toughen up” as he looks to adapt to the rigours of the Premier League at Arsenal.

The 20-year-old French striker has made two appearances for the Gunners since his free transfer from Auxerre earlier in the summer, coming off the bench against Fulham and Fenerbahce.

And although the forward says he is settling in well to life at the north London club, he accepts that it will take him time to find his feet in the English top flight.

“I’ve got used to my team-mates really well,” Sanogo told Arsenal Player. “I’ve had time with and spoken to people like Bacary Sagna who’s from Auxerre too and this has really helped me to settle in. I’ve felt really well ever since I got here.

“It gives me confidence [to see Sanga and Abou Diaby], they’ve taken the same path [from Auxerre], got into the team and they’ve done really well here so I’d like and hope to emulate what they’ve done.

“But I will need time, it’s a new way of life, a new league and it will take time to adapt. It’s something I will manage.

“I think I’ll have to toughen up and improve my strength, that’s part and parcel of such an intense league as the Premier League, as well as getting used to the step up, which it is from the French league.”