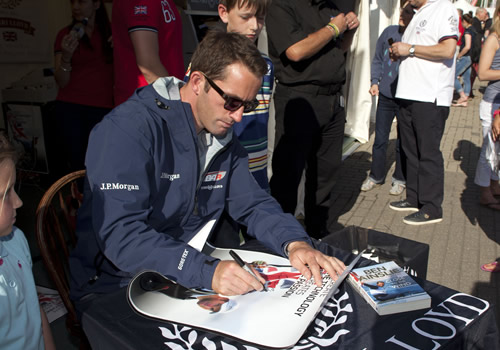 Sir Ben Ainslie waited about an hour after helping his crew claim a famous America’s Cup victory before resetting his course on a new challenge.

Ainslie, who called the tactics on Oracle Team USA as they completed a famous comeback win in San Francisco, wants to lead a British team for the next edition of sailing’s oldest and greatest prize.

As winners, Oracle, backed by software billionaire Larry Ellison, will decide on the format, venue and timing of the next event and the sort of boats that will race.

But Ainslie – who stepped back from a planned British challenge for this year’s regatta due to a lack of funding – wants to be involved.

“The America’s Cup started in Britain in 1851 around the Isle of Wight and we’ve never won it and it’s about time we changed that,” he said.

“We would love to build a British team for the future but we’ll see how that develops in the next few months, when we know more about where the next America’s Cup will be and what type of boat it will be raced in.

“This year’s Cup has showcased what sailing is really about and capable of. These boats are amazing, they are so fast and so physical and it’s great for the sport of sailing.”

Ainslie is the only the sixth sailor in history, and the first from Britain, to win Olympic gold and the America’s Cup – but he’s certainly not the first Team GB Olympian to target the Auld Mug.

Between 1899 and 1930, British tea magnate Sir Thomas Lipton launched five campaigns for the trophy and lost them all, earning the nickname the ‘best of all losers’.

But challenging is not cheap, the defeated Emirates Team New Zealand syndicate spent an estimated $100 million on their campaign and it’s little wonder the event was once described as similar to ‘standing fully-clothed under a cold shower, tearing up 100-dollar bills’.

But Ainslie knows Britain boasts some of the world’s top sailors, though Team GB team-mate and double Olympic champion Iain Percy is expected to skipper the Swedish-backed Artemis challenge next time around.

“We’ve certainly got a lot of talent in Britain, we’ve got a lot of sailors racing for teams in this America’s Cup and we’ve also got the designers,” he added.

“We just need to put that together into a team that can be successful in this arena.”

But Ainslie’s immediate goal is something a little less strenuous – some time on dry land taking a well-earned break, after a rollercoaster two years of sailing success.

“I’ve not stopped since the Olympics and looking forward to a bit of downtime,” he added.