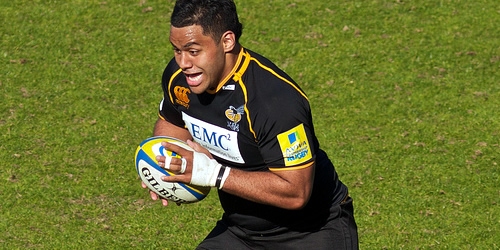 Billy Vunipola’s switch from London Wasps to Saracens might have also meant a change of position, but the 20-year-old believes both moves could boost his chances of securing an England starting spot.

Vunipola, who made his senior England debut this summer on the tour of Argentina, was a standout star for Wasps last season at No.8 but played at blindside flanker on Saturday on his Saracens debut.

The move certainly didn’t do the former Harrow schoolboy any harm, with Vunipola impressing in the 42-20 victory over London Irish at Twickenham in the London Double Header.

Vunipola’s move from his usual spot allowed Saracens to include regular back-row, South African Ernst Joubert, but the England flanker is confident he won’t be crowded out when it comes to England selection this autumn.

“I definitely think and hope that being here will help my international aspirations,” said Vunipola, whose older brother and England colleague Mako started the game on the bench, coming on to score a late try.

“People might think playing at six [will help my international chances], it might not, but if I am playing well then hopefully the coaches will think I warrant being in the squad and that’s what I am looking to do.

“I’d like to think Argentina is the start rather than the end. I was a bit envious [of Mako playing for the Lions]. He always seems to do things before me. I’m always playing catch up.

“He did well and I’m really proud of him and pleased for my parents as well because of the hard work they put in for both of us. We’re paying them back slowly.”

Vunipola has lost 5kg since joining Saracens as part of a conditioning programme to make him even more dynamic around the park.

And the Sydney-born player insists it has already made an impact, adding: “I’ve slimmed down a little bit, you might not have noticed it, but I’m feeling good. All the boys have been really good to me, very welcoming.

“Hopefully we can keep this going. It’s good weight to lose and I’m feeling fit. It definitely helps the carrying – if I have more energy to carry then every carry will be a gain rather than a neutral or negative.”