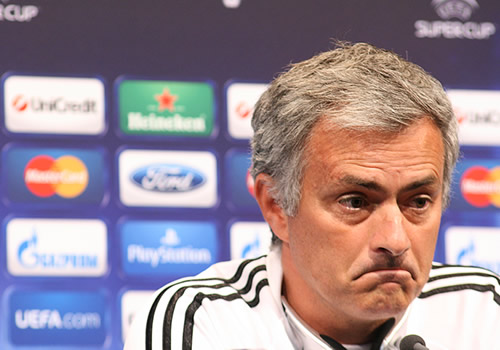 Jose Mourinho signed a four-year deal with Chelsea in June

Jose Mourinho hopes Chelsea will be able to avoid the transfer negotiating table when the January window opens.

Speaking at a news conference on Friday, the Portuguese coach said he had no desire to add to his squad and hopes he can keep all his players happy.

“The market closed so at the moment I am not worried about the market,” Mourinho said. “I would be happy in January if nothing happens.

“I spoke to the players on Thursday and it was the first time that we were together with the whole group and I told them I wish in January everybody is happy and no-one wants to leave.”

Chelsea added a host of new signings during the summer, including Andre Schürrle, Willian, and Samuel Eto’o before allowing a number of stars to leave on loan.

Mourinho did admit he felt Tottenham Hotspur were the “champions” of the transfer market, though.

The Blues boss did reveal Michael Emenalo, Chelsea’s director of football, and his team of scouts were always on the hunt for new talents.

Juan Mata – voted Chelsea’s player of the year last season for his match-winning displays – is one star who may suffer by the arrival of yet another batch of attacking midfielders, in Schürrle and Willian.

Mourinho, though, hopes to keep his stars content so they want search for another club come January.

“I don’t know if I will keep them happy or not but I am happy,” he added. “I have so many good players.”

The former Real Madrid and Inter Milan supremo added the only way to manage the situation is to “let them speak on the pitch” and not judge them by external factors, like a player’s family or friends’ comments in the media.

“The honest way is to let them speak on the pitch,” added Mourinho. “I will judge them on the pitch not on words, interviews or agents, parents or friends’ comments in the press.

Chelsea travel to Goodison Park to play Everton on Saturday, and Mourinho revealed Eto’o and Mata are both available for selection.

Wenger: Arsenal’s Wilshere can be like Zidane for England