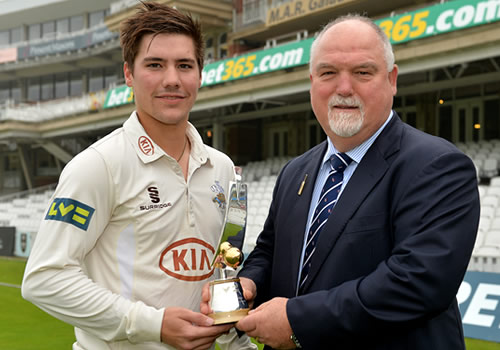 Following in the footsteps of Joe Root is not easy but former England captain Allan Lamb insists this year’s LV= County Championship Breakthrough Player Rory Burns can more than match his predecessor’s feats.

Surrey were relegated from Division One of the LV= County Championship following last week’s six-wicket defeat by Warwickshire.

Even the likes of Graeme Smith, Ricky Ponting and Hashim Amla were unable to prevent the drop, not to mention county legend Alec Stewart after the former wicketkeeper stood in as director of cricket following Chris Adams’ dismissal in June.

But despite the doom and gloom surrounding a club still mourning the death of Tom Maynard last year, there has been one shining light in the form of opener Burns.

The 23-year-old headed into the last county game of the season as Surrey’s second-top run scorer with 835, behind Vikram Solanki’s 944, at an average of 33.40.

And Lamb, who won two Ashes series in the 1980s, insists Burns is more than worthy of taking over the mantle from Root after the Surrey youngster fought off competition from new England squad member Gary Ballance, Shiv Thakor, David Willey, Scott Borthwick and Luke Wells.

“Rory Burns has had a great season – I’m just disappointed that it has been set against the backdrop of Surrey being so bad,” said Lamb.

“He has got a lot of potential and it really started to show this summer. He has not done badly at all – it is very difficult getting 1000 runs and to pass 800 in a season is a very good achievement.

“I think you have got to develop your youth and I think that is the problem with Surrey. They have brought in older players instead of bringing through the youngsters.

“Surrey have a very large salary budget and they have brought in some amazing players this season but you can’t keep buying overseas players.

“For a county of their stature to finish how they have done and be playing second division cricket – it is not a good sign. They have gone wayward and the players have lost their way quite a bit.

“I know that their other youngster Chris Jordan went to Sussex because he wasn’t playing so much and I think Surrey need to trust their youngster a bit more. It is even more impressive that Rory has managed to thrive this season in that environment.”

Root has set the bar very high for winners of the LV= County Championship Breakthrough Player award after going on to help England claim the Ashes this summer.
But Lamb insists Burns’ wicketkeeping skills mean the Surrey star could yet follow suit.

“I think Rory will be right up there in terms of England in the future – there are a few others pushing for it but he has done well,” Lamb added.

“There are a lot of players who can keep these days. Matt Prior is going to be around for a while and then you have Craig Kieswetter, Jos Buttler and a number of others.

“But it is still an important skill and may increase his chances of breaking through.”