Davis Cup 2013: Andy Murray is named in Great Britain's team for the World Group play-off with Croatia in Umag later this month 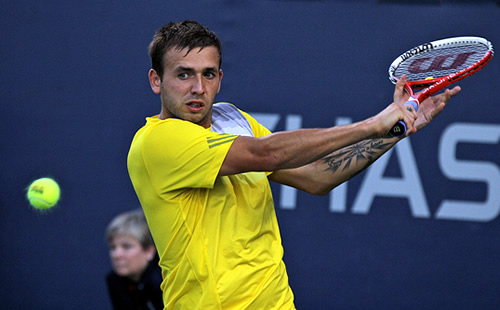 Dan Evans reached the third round of the US Open in New York Photo: Marianne Bevis

Andy Murray has been named in Great Britain’s Davis Cup team for the World Group play-off with Croatia later this month.

The British No1, who is currently in New York as he looks to defend his US Open title, is joined by Dan Evans, James Ward and Colin Fleming in the squad.

The 26-year-old missed the last tie back in April, when Evans, Ward, Fleming and Jonny Marray claimed an impressive victory over Russia.

The clash takes place in Umag on 13-15 September on clay, with the winning nation qualifying for the elite World Group – something Great Britain have not managed since 2008.

The tie is scheduled to begin four days after the US Open final at Flushing Meadows.

Great Britain captain Leon Smith said: “We are delighted to be sending our strongest possible team to Umag in what will be a very tough tie.

“Croatia are former winners of the Davis Cup and currently ranked No. 11 in the world, but as we proved in Coventry back in April, we can upset the odds. May the best team win promotion into the World Group.”

Asked about the possibility of playing three days in a row after being named in the team, Murray hinted that his participation in the doubles is not set in stone.

“It depends on the first day,” said Murray after his fourth-round win over Denis Istomin at the US Open. “I won’t play if I have a four or five-hour match, because we have guys that are good enough to step in and play and win.

“We have a lot of very good doubles players. There still can be changes made to the team between now and then. We’ll see.

“But if I’m fit and fresh after the first day, and me and Colin obviously played well a few weeks ago, I think that would be the best chance to win the match.”