Marianne Bevis looks ahead to a busy weekend of Davis Cup tennis, with the likes of Novak Djokovic and Rafael Nadal in action 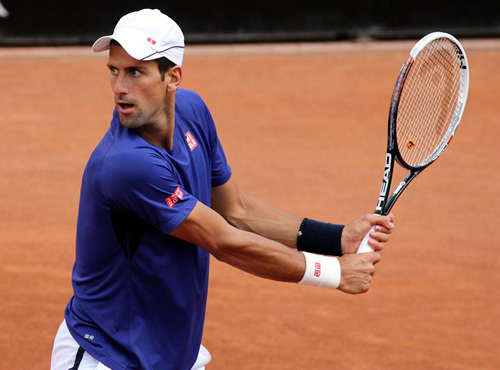 Novak Djokovic is among the big names in action this weekend Photo: Marianne Bevis

With the gates of Flushing Meadows closed on the 2013 US Open just a couple of days ago, all eyes turn to the biggest annual international team competition in the world, the Davis Cup.

In this its centenary year, the tournament has seen 130 nations and more than 500 athletes taking part, but while its place in the tennis calendar has never enjoyed such a high profile, its schedule is a cruel one, especially at this critical stage in the event. Four teams are fighting for a place in the final showdown in December, while 16 more compete for the chance to play in the World Group in 2014.

It is necessary only to look at the names who are putting their exhausted bodies back into competition after the gruelling US Open hard-court swing to appreciate the national pride—and glory—that is at stake.

World No1 Novak Djokovic is back on duty having helped Serbia to the semi-finals with his winning contributions against Belgium in Round 1 and the USA in the quarter-finals. He has been a stalwart of the team that took the title in 2010—an achievement he credited with much of his success in 2011, when he won three Grand Slams among 10 titles.

World No2 and fellow US Open finalist, Rafael Nadal, rejoins the Spanish team for the first time since he was part of the trophy-winning squad in 2011. Injury prevented him from playing in a depleted and losing Round 1 line-up, but his presence now aims to prevent the five-time champions from slipping into the Zone Group competition for the first time since 1996.

Nadal and Djokovic were still playing well into the evening in New York on Monday, so both have had to fend off not just physical and mental fatigue but also jet-lag to head back to home soil—in both cases making a switch to clay—for a Friday morning start to yet more best-of-five-set tennis.

No5 Tomas Berdych has also been a near constant in Davis Cup, spearheading the Czech Republic to the title last year. In Round 1 this year, he played and won three rubbers, including the decisive one against Switzerland’s Stan Wawrinka, and will be the backbone of the squad that takes on Argentina in the semis.

Wawrinka, a semi-finalist in New York and up to No10 in the rankings, is a constant on the Swiss bench. Last year, he was backed up by Roger Federer, but this time, Wawrinka is the leading man in the play-offs.

The other big name in action this weekend is Great Britain’s Andy Murray, playing in Davis Cup for the first time in two years. But Murray was also part of the GB squad the last time they reached the top tier of the tournament in 2007. Then, they beat Croatia, and will now aim to do so again in their second meeting.

On this occasion, the opposing team is without their top-ranked man, Marin Cilic, and Murray also has the benefit of having played fewer matches than Djokovic or Nadal through the hard-court season, while having a terrific doubles run with Colin Fleming in Montreal. He may, as a result, play the doubles rubber as well as two singles.

Murray will be supported in the singles by the rising Briton Dan Evans, who made such an impression in April by winning the tie-deciding rubber against Russia. He went on to come through qualifying and reach his first Grand Slam third round in New York.

Canada’s lead player, Milos Raonic, is the highest-ranked Canadian man in the history of the ATP rankings, currently No11.

Serbia are bidding to reach the final for the first time since their maiden title in 2010, and are contesting the semis for the third time in the last four years. Before 2010, Serbia had never won a World Group tie.

The Czech defending champions face Argentina in the semi for the second consecutive year. This year, though, the Argentines are without Juan Martin del Potro and David Nalbandian, who had shoulder surgery after the Davis Cup quarters. Last year, Berdych won both of his singles rubbers and combined with Radek Stepanek to win the doubles, too. Stepanek won the decisive fifth rubber against Spain’s Nicolas Almagro in the final in Prague.

The Czech Republic are making their 32nd World Group appearance, the most for any nation along with USA, and are currently ranked No1.

Argentina are into the semis for the fourth straight year and the ninth time since returning to the World Group in 2002. They were runners-up in 1981, 2006, 2008 and 2011, the only nation to have lost four finals without winning the title.

Croatia won the title in 2005, while nine-time champions Great Britain have not won since 1936. But while Croatia have featured in the World Group for 11 of the last 12 years, GB were responsible for their only year out of the top tier in the 2007 World Group play-offs—on Wimbledon’s grass.

Croatia has nominated 16-year-old Borna Coric, who won the US Open junior title last weekend, as their second singles player. Coric will make his Davis Cup debut in the opening singles rubber against Murray.

Although Murray is scheduled to play three rubbers, GB captain Leon Smith has adjusted his line-up to include Jonny Marray, who is Colin Fleming’s regular doubles partner, in place of James Ward.