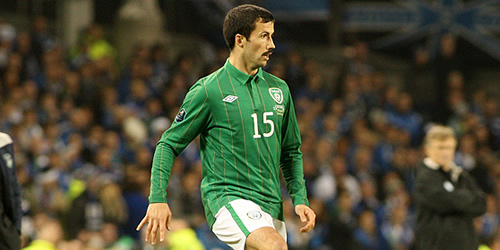 Giovanni Trapattoni has left the Republic of Ireland by mutual consent following an “amicable” meeting with the FAI on Wednesday morning.

The Irish suffered a 1-0 loss to Austria on Tuesday night which virtually ended their hopes of reaching next summer’s World Cup in Brazil.

Here is the best of the Twitter reaction from the professionals to the end of Trapattoni’s five-year reign as Ireland boss.

West Brom striker Shane Long (‏@Shanelong009) hails the Italian as a true football great: “Legend of the game and took Irish football to the next level, thanks for everything Mr Trapattoni.”

His Baggies team-mate Steven Reid (‏@stevenreid12) adds: “Trappatoni is gone then.. Can’t argue with the job he did qualifying for the Euros and play-offs in his reign.. But has come out with some stupid comments at times and communication could have been a lot better #Trappatoni”

Ireland defender Darren O’Dea ‏(@odea_darren) speaks about his affection for the departed manager: “Trapattoni is a legend in the game. It was an honour to play for him!”

Nottingham Forest striker Simon Cox ‏(@Scoxy31Real) pays credit to the Italian: “I would like to thank Mr Trapattoni for the chance to play international football. It’s a shame we couldn’t get what we all wanted qualification. Now let’s wait and see who the @FAIreland give the job to.”

Hull City midfielder David Meyler ‏(@DavidMeyler7) echoes Cox’s sentiments: “I’d like to say thank you to Mr. Trapattoni and all his staff for giving me my first cap. Enjoyed every moment of it. #COYBIG”

Former Ireland midfielder Matt Holland (‏@mattholland8) felt the former Juve boss did a good job but the time was right for change: “Mr. Trapattoni deserves a lot of credit. Remember where we were when he took over – but the time is right for a change.

Out-of-favour Ireland midfielder Keith Fahey (‏@Keith_Fahey) has his say: “Very fickle world we live in.. One minute everyone loves ya.. The next they’re calling for your head.. #ficklepeople”

Finally, to add some glamour to proceedings, Westlife’s Nicky Byrne (‏@nickybyrneoffic) names his favourites to succeed the Italian: “Trapattoni – Seems a Nice man but time to go Martin o Neill ? Good but for me Roy Keane or Neil Lennon Young Fearsome & Passionate #Euro2016”