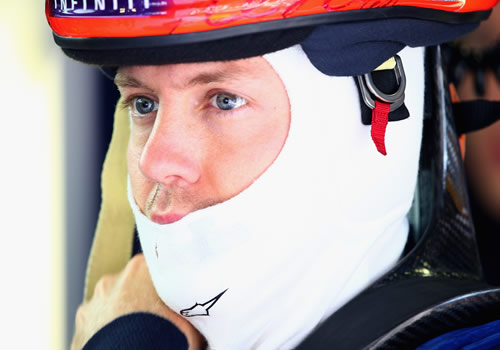 The German was thrilled to win at the circuit despite suffering from a gearbox problem in the latter stages of the race.

The crowd seemed less happy with the result, with many booing the world champion on the podium.

“It was a fantastic race but you can hear the difference when you don’t win here in a red suit,” said Vettel. “It means you have done well and beaten the red men. It was a great team effort today.”

There were cheers for second-placed man and crowd favourite Fernando Alonso, who is now 53 points behind Vettel in the championship.

The Spaniard said: “Second place is good, to have this podium ceremony which is the most spectacular podium of the year.

“Hopefully we’ll come back next year and have first place.”

Mark Webber was pleased to finish on the podium at Monza for the first time in what will be the last Italian Grand Prix of his Formula 1 career.

The Red Bull driver managed to hold off Ferrari’s Felipe Massa despite suffering from a gear box problem.

Webber said: “I felt more comfortable on the tyres at the end of the race and got better speed out of them.

“It was a good battle with Alonso but a great team result and thanks to Monza on my final time here in F1.”

Red Bull boss Christian Horner was pleased with both of his drivers and is optimistic about their chances of securing the constructors’ championship title.

With both Mercedes drivers lacking pace and finishing lower in the points it saw Red Bull extend their lead over the team to 77 points.

“That was a great team performance today,” said Horner. It’s a great victory for us, but there’s still 175 points left. Anything can happen but we’re in a healthy position.”

Sauber’s Nico Hulkenberg, who started the race in third and drove fantastically to finish in fifth place, was the talk of the day, with rumours spreading that he could steal Felipe Massa’s seat at Ferrari for next year.

Asked about the possibility of joining Ferrari, he said: “It’s definitely something I wouldn’t deny I’m interested in – it’s a no-brainer. I don’t know if it will happen, time will tell.”

The German admitted that it was a tough race and that he felt under pressure from Nico Rosberg, but that it was fantastic to get some points.

Vettel is 53 points ahead of Alonso in the championship so it’s all to play for between the pair as F1 leaves Europe and heads to Singapore.