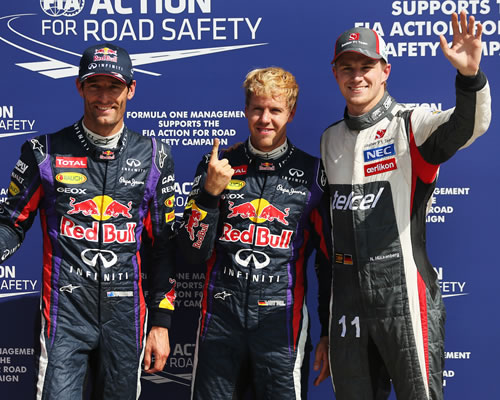 1) Sebastian Vettel (Red Bull) 1.23.755
Upon Lewis Hamilton’s elimination in Q2, very few looked beyond a Vettel pole, and the German confirmed that with a supremely confident drive to a staggering 40th pole position. Behind, his nearest challengers will pray for the rain that’s been promised for Sunday. Anything less in the weather department could mean curtains for some title challenges.

2) Mark Webber (Red Bull) +0.213
A swansong that in truth many don’t wish to end. Following on from a strong qualifying in Belgium, there is once again an opportunity for the Aussie to sign out of F1 with at least one more race victory, but all will depend on how well he gets off the line – and we all know the history there.

3) Nico Hulkenberg (Sauber) +0.310
Most young drivers grow disillusioned when given limited machinery. For Nico Hulkenberg, he is quite the opposite. Few predicted the Sauber having the pace to qualify as high as he did, but under race conditions will he remain as competitive? With only handful of seats remaining on the market for 2014, including one potentially at a team who are racing at their home grand prix this weekend, Sunday’s performance could be career-changing.

4) Felipe Massa (Ferrari) +0.377
All session long he played the support role to his team-mate, only to end up in front of Fernando Alonso himself. With rumours surrounding his future at the Scuderia refusing to go away, it’s easy to forget that the Brazilian is fighting for his F1 future, even if it isn’t at Ferrari. From fourth tomorrow, it will be imperative that he has a fruitful 53 laps.

5) Fernando Alonso (Ferrari) +0.387
As much as he will claim to be satisfied with fifth, surely being behind his team mate and four places away from Vettel will still have him reeling in some form. That said, in being just under four-tenths slower than the Red Bull on qualifying pace alone, tomorrow’s race stint means that the Spaniard is far from out of it this weekend.

6) Nico Rosberg (Mercedes) +0.437
In qualifying sixth, Nico Rosberg’s continuing crawl to the season’s finish line continues despite a strong first half of the season. Within the top ten, the German appears in limbo; unable to challenge for podiums and race wins in recent outings. Without question, he’ll be one to pray for rain on race day.

7) Daniel Ricciardo (Toro Rosso) +0.454
The driver everybody’s eyes have been on recently didn’t disappoint on Saturday with another excellent top ten result. With the Toro Rosso looking supreme in a straight line as it has in previous years, could Ricciardo surprise on race day to back up Red Bull’s decision to promote him? Certainly one to watch.

8) Sergio Perez (McLaren) +0.747
It’s been a difficult 2013 for ‘Checo’ and company but from eighth, and potentially some rain showers, Sunday could be an excellent opportunity to temporarily silence some of his harsher critics. Out-qualifying Button will no doubt help the confidence too.

9) Jenson Button (McLaren) +0.760
Claimed to be disappointed with ninth but in reality should be content given how much easier the McLaren managed to make it into Q3 as opposed to previous outings. The Briton will be one of the many to pray for rain given his expertise at the changeable conditions, and should rain be the case, a first podium of 2013 could be well within reach.

10) Jean-Eric Vergne (Toro Rosso) +4.295
A scrappy drive to tenth, but a Q3 appearance nevertheless. With his team mate stealing all the headlines in recent days, how exactly will the Frenchman respond is the thought on everyone’s minds. To finish the season strong in order to convince Toro Rosso to keep him on will require a tough mentality, and starting from tenth tomorrow must be utilised.

11) Kimi Raikkonen: The Finn rarely qualifies outside the top ten, and with both Ferrari and Lotus seemingly vying for his 2014 services, could a poor weekend change his view on Lotus?

12) Lewis Hamilton: With his title hopes already slim before tomorrow’s race, the Briton has it all to do after an uncharacteristic qualifying.