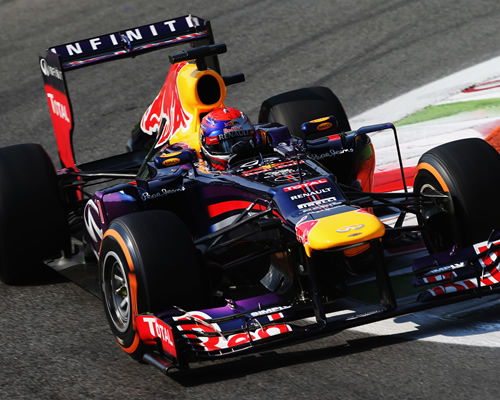 Sebastian Vettel put on a dominant display to take pole position for the Italian Grand Prix at Monza, five years after he won his first-ever race at the track.

The German was quickest throughout the session to take his fourth pole of the season and Red Bull’s 50th of all time.

Red Bull had further cause for celebration as Mark Webber secured second place as the team locked out the front row.

Nico Hulkenberg took everyone by surprise by putting in a sensational lap time to take third place. Sauber had not qualified higher than 10th all season before Saturday.

Crowd favourites Ferrari may have some work to do to secure a much-needed win on Sunday, with Felipe Massa starting ahead of Fernando Alonso, who qualified in fifth place.

Lewis Hamilton’s hopes of a fifth consecutive pole position were destroyed after he failed to reach Q3 – despite having been third-quickest in the first session.

The stewards are investigating if Adrian Sutil impeded the Mercedes’ driver, but it is the first time in 67 races, excluding penalties, that Hamilton has failed to make it into Q3.

There was disappointment for Lotus as both Kimi Raikkonen and Romain Grosjean dropped out of Q2, only managing 11th and 13th on the grid.

The opening session was uneventful with the usual suspects dropping out. Further up the field the competition was fierce, with just seven-tenths separating Vettel in first and Di Resta in 15th.