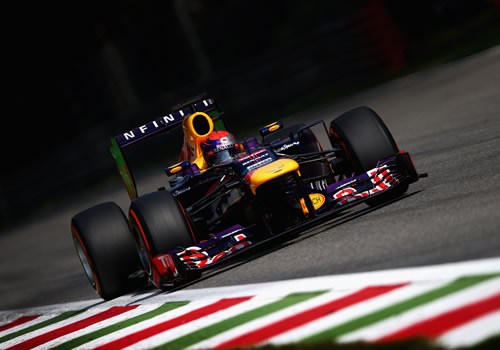 Sebastian Vettel led from start to finish in a confident display to bring home victory at the Italian Grand Prix at Monza, giving him a 53-point lead in the championship.

The result is the German’s 32nd victory, matching the number of wins by Fernando Alonso, and also marks a hat-trick of wins for the defending world champion at the historic circuit having won previously in 2008 and 2011.

Crowd favourite Alonso finished second as he stood on the podium for the 92nd time in his career.

The Spaniard has finished on the podium for the last four races at Monza but was unable to close the gap, finishing 5.4 seconds behind Vettel.

Red Bull’s Mark Webber held off Felipe Massa to take the final spot on the podium and claim his first top-three finish at the track.

The rain held off which resulted in a relatively uneventful race, although there was contact between Kimi Raikkonen and Sergio Perez on the first corner which saw the Lotus driver have to make a pit-stop.

Paul Di Resta’s weekend went from bad to worse and he crashed out of the race on the first lap after locking his tyre and colliding with Romain Grosjean.

There was disappointment for Toro Rosso’s Jean-Eric Vergne as he was forced to retire with a suspected engine failure.

Lewis Hamilton was plagued with bad luck throughout the race, suffering from radio problems from the start.

The Brit fought his way up to finish in ninth place after a puncture earlier in the race forced him to make an extra unplanned pit-stop.

His dreams of being a contender for the championship are all but over now as he lies 81 points behind Vettel.

He was not the only driver to suffer from technical issues – both Red Bulls had problems with their gearboxes which saw Webber have to short-shift between second and third gear.

Raikonnen’s race was hampered by a problem with his Kers system as the Finn finished just outside the points in 11th place.

Nico Hulkenberg drove a confident race, keeping the Mercedes of Nico Rosberg behind to place fifth to claim Sauber’s best result of the year.

It was a disappointing race for McLaren who were celebrating their 50th anniversary after Jenson Button finished in 10th, while Perez lingered behind in 12th place.