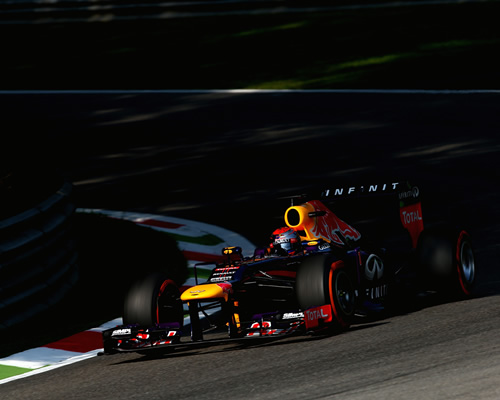 The defending world champion, who won at Spa two weeks ago to extend his drivers’ championship lead, finished the second session at Monza more than six-tenths clear of the Australian.

Lotus driver Kimi Raikkonen was third-fastest in the second session, while Mercedes’ Lewis Hamilton was sixth-quickest after the Briton topped a tight first practice session at Monza.

“It will be very tight this weekend, as we saw in the first practice,” said Vettel after the second session.

“It will be close tomorrow in qualifying with quite a few cars separated by only a few hundredths of a second.

“There are a few things we still need to do to optimise the car, as there are two or three corners where we are sliding more than we would like. It’s positive today, but it’s only a Friday.”

Webber, meanwhile, was pleased with his car’s pace in practice but know better than to get carried away with the result.

“We seem OK here, although it’s only Friday,” said Webber. “We seemed good on Friday in Spa and then everyone was with us in P3. But, that said, the car feels good although we have some work to do to prepare for the race, so let’s see tomorrow.”

Conditions were hot and dry on Friday, which is expected to be the case for the rest of the weekend. The drivers used only the hard tyre during the first 90-minute session this morning, before trying out the medium tyre as well in the more representative qualifying and race conditions in the afternoon.