Italian Grand Prix 2013: Oisín Gregorian reflects on Sebastian Vettel's dominant win and what it means for the rest of the paddock 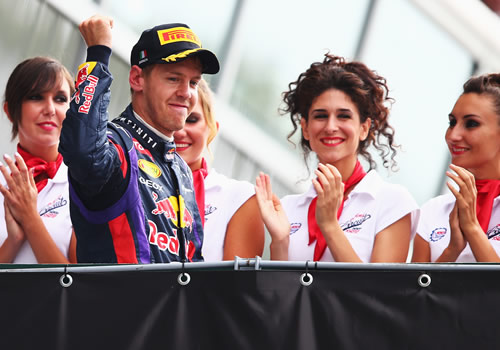 If Belgium a fortnight ago was the warning shot, Monza in northern Italy was to be the wounding one.

Heading back from the summer break in the Ardennes, Red Bull and Sebastian Vettel’s rivals knew the score. Unfortunately, in the weeks that have since followed, neither rival – be it team or driver – has been unable to get to within a whisker of the German, who now stands on the brink of fourth-straight crown as said rivals simply watch on.

And what better place to strengthen one’s grip on the championship? Monza, Ferrari’s spiritual home, and one where the loyal Tifosi pack the stands no matter what kind of form the prancing horse was under prior to the weekend. Despite heading into the weekend in such a healthy position in both championships, Red Bull played down their Monza chances just as they did with Belgium.

How those chasing wished their pre-race concerns beforehand were to be case. If Belgium and Monza were perceived as Red Bull’s weak spots on the calendar, then the rest of the F1 paddock will rightfully be worried for the rest of their respective campaigns given the brutal bashing that had been received at both venues.

As for Vettel, what more could you say. Sunday’s race victory was number 32 in only his sixth full season. Contrast that to Fernando Alonso, the person he is now tied with on the list of all time race victories, who has been around in the sport since 2001.

He may not be the most popular on the grid; the persistent booing at each Grand Prix proves that, but the marriage between himself and Adrian Newey these past few seasons has been nothing short of exemplary.

Upon sealing his 91st and final win in 2006, nobody in the sport expected Michael Schumacher’s record to ever be eclipsed. Suddenly the seven-times world champion has recently gone on the record saying he wouldn’t mind if Vettel was to take his records from him, such has been the latter’s dominance in recent seasons. Did you really mean that, Michael?

Now heading into the traditional season-ending flyaway season, Vettel’s position makes it more of a question of when. With a lead of more than two race victories over Alonso, only a series of unlikely mechanical faults or race collisions can derail the German’s latest march, and even if the Red Bull was to dramatically experience a loss of form, a series of high end points finishes will still be more than enough one would think.

This current predicament leaves plenty of rivals considering their next move.

Do the likes of Mercedes, who conceded defeat in the drivers’ championship following a testing weekend, pack it in development-wise and begin to focus on 2014? Will Ferrari’s seemingly fruitless chase of Red Bull compromise their preparations? Amongst all this, some crucial seats remain to be filled.

One of those happens to be at Ferrari, who has yet to decide on their second seat for 2014. In almost a carbon copy of last season, Felipe Massa appears to be doing just about enough when it matters. With an announcement due in the next week, the Scuderia’s fans anticipate.

Whilst keeping on Felipe Massa retains certain continuity, the thought of rehiring Kimi Raikkonen to turn the marque into genuine title contenders in both championships could well be too big an opportunity to turn down. Should Raikkonen opt to remain at Lotus, an option which his representative’s favour, Ferrari could well turn to the exciting Nico Hulkenberg, who could well have done enough in front of the team’s bosses in a Ferrari-powered Sauber.

Amongst the rumours, Massa’s situation has looked increasingly grim in recent weeks however; it’s a situation that would leave many in no surprise of should he get the nod for one further year.

Come the next outing; expect plenty of these questions to be answered.