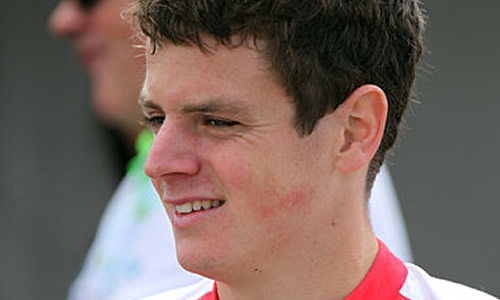 Alistair Brownlee put a consoling arm around brother Jonathan after he lost a sprint finish for the world triathlon title – but didn’t hold back on giving him a hard time for his second place.

The Olympic champion came into the final stop of the eight race season in London leading the world standings but the ankle injury he has battled all season meant he finished well out of contention.

That left Olympic bronze medallist Jonathan Brownlee, the defending world champion, and Javier Gomez in a straight shoot out for the title – the Spaniard silencing the home crowd by winning a desperate sprint for the line.

“He’s thrown a world title away for being a complete tactical numpty,” said Alistair Brownlee. “I saw him make his move with 250m to go and I thought ‘what an idiot’

“I’d told him to use his head, if he’d come into the last 100 metres behind Gomez he would have won and he didn’t do it.

“I’m not surprised I struggled to be honest. I probably should have pulled out but I’ve never pulled out of a race in my life and I’m not about to start at the World Championships in London.”

Slovakia’s Richard Varga took the swim out hard but the Brownlee brothers were in close contention and soon established themselves in a 13-strong lead group on the 40km bike leg.

Gomez was also right in the mix and the Olympic champion didn’t hold back in telling his rivals to take their turn at the front as a chase group lurked 30 seconds back.

Alistair Brownlee was the most active rider, pushing the pace to sap the energy of his rivals – a tactic he used to winning effect in Sweden recently.

After wins in Stockholm, Kitzbuehel and San Diego and a second place in his only other start in Hamburg, Alistair Brownlee has been nothing but consistent in 2013, despite his nagging ankle injury.

But the bike leg clearly took too much out of him and, while he tried in vain to battle the pain, he faded to finish a distant 52nd – meaning he also dropped off the podium in the overall world title standings.

That left his brother and Gomez slugging it out for the race and the overall title – a head-to-head that was only decided in the final metres, the Spaniard edging ahead to claim his third world title after wins in 2008 and 2010.

“It’s hard losing by that much because you just ask yourself what you could have done differently.

“Second in the world is not too bad but I wanted to win. Perhaps I should have let him make the move on the sprint but I’ve won sprints like that before, so I don’t really know what I could have done.”

The Brownlees’ sibling rivalry and rock-solid training partnership is based on honesty and Alistair’s analysis of the race was delivered with a grin, while his brother later claimed the Olympic champion shouldn’t have even been on the start line.

“He was really worried about his ankle and he’s not run properly for three weeks,” he added.

“All season he’s only done about five weeks training and he’s only won the races he has because he is so good.

“I knew he couldn’t run well, he’s been in real pain and to expect to run a 30 minute 10km is just not realistic.

“He only started because of his memories of doing so well last year. He would have expected me to win a sprint finish like that but I tried my best.”