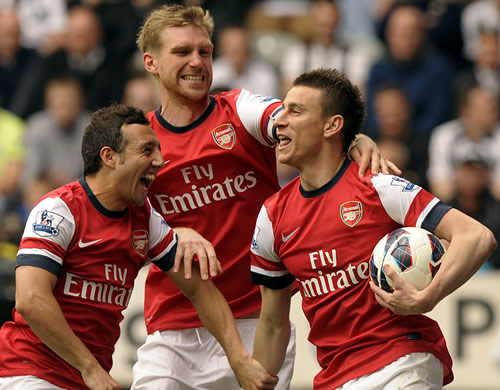 Laurent Koscielny believes he has improved significantly since joining Arsenal from Lorient in 2010.

The France defender has made 90 Premier League appearances, scoring six goals for the Gunners since his move three years ago and has become a regular in the Gunners’ rearguard.

And although the 28-year-old is pleased with the developments he has made following his move to north London, the centre-half feels there is still plenty of room for improvement.

“I feel that I’m better, better in quite a lot of areas,” Koscielny told L’Equipe.

“I have more confidence in challenges, I feel that I hurt opponents more. I need to be more aggressive but in all areas: speed, controlling and passing, in aerial challenges, anticipation…In general, I’ve gained in physical presence. But you’ll never hear me say I’m an undisputed first-choice for club or country.

“Repeatedly playing in big games allows you to acquire experience. I still make mistakes, a bad clearance, bad positioning, but rarely do I play badly for the full 90 minutes. It’s just that after a mistake, you have to be able to start again with the simple things,” he said.

“I’ve reduced the time I drift after a mistake. Before there was perhaps five or ten minutes where I wasn’t 100 per cent calm. Less now.

“But to get yourself back into things, you have to keep it simple: win the following challenge, make sure of your pass forward, your control.”