Man United transfers: Ander Herrera refuses to be drawn on speculation that he could be set for a January move to Old Trafford 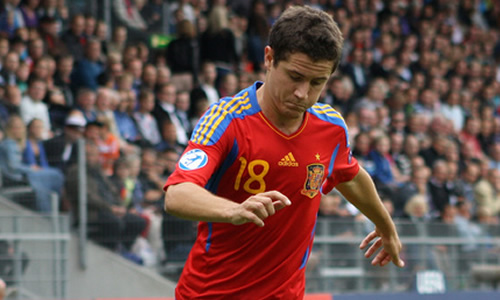 Ander Herrera was a target for Manchester United Photo: henrikalexandersen/Flickr

Ander Herrera refused to be drawn on speculation suggesting that he could be set for a January transfer to Manchester United after the Red Devils’ failed bid to sign him this summer.

United were thought to be close to snapping up the Athletic Bilbao midfielder on transfer deadline day but eventually refused to pay the buy-out clause in the 24-year-old’s contract.

And when asked if a possible move to Old Trafford could be on the cards in the winter, Herrera insisted he is purely focused on the task at hand with Bilbao.

“People have told me the press is saying United could try again for me in the January transfer window, although I haven’t read the newspapers myself, I don’t waste my time with that,” said Herrera.

“We have a great team and a marvellous new stadium. When I start a season, I want to do a good job and finish what I’ve started.”

Herrera also said that he was “flattered” by United’s interest in bringing him to the Premier League – but insisted he is pleased to feel valued by his current club.

“How could I feel bad that a club as big as United made a formal ofer for me?” he continued.

“I’m flattered by that, and grateful that Athletic didn’t want to negotiate with them, footballers value that type of thing.

“They had to pay the clause, and then sit down with me. Some people have not been very rigorous with their reporting. I hope that, just like we apologise when we make mistakes, those people will also admit their errors.”

He concluded: “Athletic made it clear that the only option would have been to pay my buy-out clause, and if they did not, they wouldn’t be able to sign me. It’s completely false that United and I reached a deal.”