There are a number of players still in with a chance of qualifying for this year's ATP World Tour Finals. Marianne Bevis reports 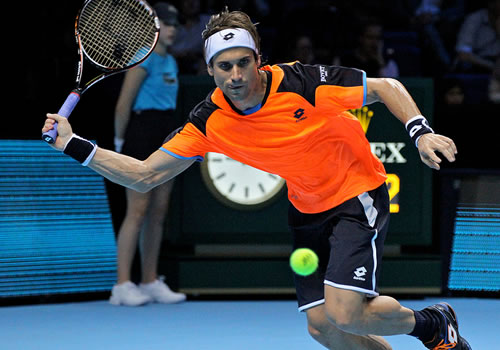 David Ferrer is close to qualifying for the season-ending tournament in London Photo: Marianne Bevis

As the men’s tennis tour comes full circle back to where it began on the western Pacific seaboard in January, there is far more at stake than just titles.

The first of the year’s Majors—the “Grand Slam of Asia/Pacific” in Australia—is heralded by the hard courts of Brisbane, Sydney and Auckland.

Then the tour takes parallel paths through South America’s clay and Europe’s indoor courts, unites again in the heat and humidity of Indian Wells and Miami, and sunbathes on Mediterranean clay before soaking up Paris’s romance. Then tennis returns to its roots on Wimbledon’s grass, before heading back with a vengeance to the punishing North American hard courts and the New York show-stopper of the US Open.

Now the runners and riders have hit the home stretch in the race to the year’s climax, the ATP’s World Tour Finals. And the autumn gallop takes off back in the east in the glamorous and lucrative Asian Swing. As the tour sweeps through Malaysia, Thailand, Japan and China, heading back indoors ahead of the last Masters of the year in Paris, it is that ‘lucrative’ quality—in ranking points—that becomes so vital to so many.

For those at the very top, with places in London already sealed, it is about the year-end No1. Rafael Nadal heads the race ahead of Novak Djokovic, but their positions are reversed in the calendar rankings.

The Spaniard, who slipped out of the top four with a seven-month injury absence that spanned this entire swing and more, has not held the No1 ranking since he lost it to Djokovic at Wimbledon in 2011. He had reached 102 weeks, and now Djokovic has also just passed the 100 mark. In a neat piece of timing, then, they both return to competition next week in Beijing, where Djokovic is defending the title. Nadal, with no points to defend, therefore has a good chance of reclaiming the lead.

And if there is any doubting Nadal’s intent—not only to reclaim the No1 ranking but to claim the prestigious year-end No1 trophy for a third time in his career—his schedule should make things clear.

After Beijing, he plays the Shanghai Masters, then heads to Basel for the first time since 2004 to take on home favourite Roger Federer in his home town. Then it will be Paris and the World Tour Finals. Even if he wins none of them, he can only gain points at all of them, and he already leads the race by almost 3,000 points.

And while Nadal has won every Grand Slam, he has never won the end-of-year finale. But after one of the finest seasons of his career, claiming 10 titles, a 61-3 win-loss record, and with an unbeaten stretch on hard courts from Indian Wells to the US Open, this could be his time. For the man who always wrestled with hard courts more than any other surface, and with indoors more than any environment, that is a remarkable prospect.

So the top two ranking spots seem to be stitched, especially with Andy Murray out of contention for most, if not all, the remainder of the season due to back surgery. But the race to London is still wide open, with at least five places, plus a reserve spot, up for grabs.

Most eyes are focused squarely on Federer, who has qualified for the year-end finale for the last 11 years, reached eight finals and has won the title six times. Yet this year, after what is thus far his least successful season since he first qualified in 2002, he has yet to confirm his place, ranked No7 in the race. And unlike every other player in the top dozen, with the exception of Juan Martin del Potro who sits just above him at No6, he is not joining the Asian Swing until the last event, the Shanghai Masters. He then heads to Basel, where he was finalist last year, and Paris, which he missed in 2012.

Decent runs in each of them should see Federer qualify, and the indoor season has usually seen the Swiss champion at his most effective, but the competition around him is fierce, not least from a clutch of players eager to make the last eight for the first time.

Right on Federer’s tail in the race is fellow Swiss, Stan Wawrinka, who could even pick up enough points if he reaches the final at the Malaysian Open this week to overtake Federer.

Also poised to seal his place is the current No4 David Ferrer, who is within touching distance of another place at London. The Spaniard was defeated by Federer in the final in 2007, and has also qualified for the last three years, reaching the semis in 2011.

Both Wawrinka and Ferrer can pile on the points with their packed schedules, both playing in Beijing and Shanghai, followed by Stockholm and Valencia for Ferrer and Moscow and Basel for Wawrinka, before finishing in Paris.

Another consistent presence in the last three World Tour finals is Tomas Berdych, who attained a career-high No5 this season. He headlines the Thailand Open this week, before heading to Beijing, Shanghai and then Basel.

Del Potro, like Federer, has some work to do but is also biding his time—and resting a sore wrist—in the run-up to Shanghai. After that, he aims to defend his Basel title in what has become one of the toughest ATP 500 fields of the year.

Then there is the assault of the French.

First in line—a change in the order of things this year—is No9 Richard Gasquet, who heads compatriot Jo-Wilfried Tsonga by one place and only 150 points on the margins of qualification. And both are throwing their all at the rest of the year.

Gasquet is second seed in Thailand this week, where he is defending champion, then heads to Beijing, Shanghai, Moscow and Basel in an intense and determined campaign for London.

Tsonga made his return this week after retiring in his second-round match at Wimbledon with knee problems, and showed that he is undoubtedly still a contender for London. He reached the final in Metz, will head to the Tokyo 500 before Shanghai, and has opted for Vienna ahead of Paris.

Tsonga was beaten finalist to Federer in London in 2011—one of three years he has qualified—and as a player who thrives on indoor courts, will be in the mix in the latter stages of qualification again if he remains fit.

Then comes a string of names, all new to these rarefied rankings as London looms over the horizon, and none of them more than 600 points adrift from Tsonga.

At No11 is Milos Raonic, at age 22 the youngest in contention and with a first Masters final to his name this season in Montreal.

Just 90 points behind him at No12 is the evergreen 35-year-old Tommy Haas, the reserve man in 2001 and just missing out in 2002 after sliding from a ranking of No2 to No11 due to intermittent shoulder injuries. His career has been dogged by multiple injuries ever since, including surgery at the end of 2007, the last time he broke No10 in the rankings. The German’s incentive, therefore, is huge, but so is the task. He will need some good results in a tough field in Beijing, in Shanghai and then in the more promising fields of Vienna and Valencia.

Then there is John Isner, No13 in the race and at 28 years old, proving himself to be a late bloomer. He has scored two titles from four finals in the latter half of 2013, one of them the final at Cincinnati, where he beat Djokovic, Gasquet, Raonic and del Potro. Isner makes first his post-US Open Series appearance in Beijing, and has opted for Valencia after Shanghai.

For the likes of Wawrinka, Haas and Isner, the pot of gold at the end of the rainbow may never have looked so within reach. And though no-one doubts what the WTF crown and No1 ranking would mean to both Nadal and Djokovic, just being there would surely mean almost as much to many of their pursuers.

Race to the ATP World Tour Finals in London

Andy Murray looks in good spirits after back surgery