“I don’t know what I need to do to become No1, but the only way I can do it is playing my best," says Rafael Nadal at China Open 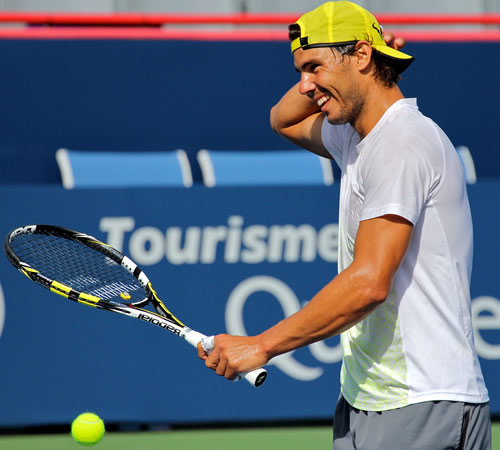 Rafael Nadal has not been world No1 since July 2011 Photo: Marianne Bevis

It is the kind of comment that Rafael Nadal has made his own since he burst into the top 10 and notched up 11 titles, including his first Grand Slam, in 2005.

From the first, he has been the last to blow his own trumpet, the last to presume he is the favourite, and certainly the last to regard himself as the best among his peers.

Take this, after winning his 60th career title at the US Open to take him to third on the all-time list of Grand Slam champions: “I feel very lucky about what happened since I came [back]. It’s true that I worked, but even like this you need luck to be where I am today.”

Or after winning a record eighth French Open this June: “If you don’t feel that you can improve, you know nothing about life, because nothing is perfect in this life. You can improve always in every way… But if you keep improving, doesn’t mean you will win more. The only thing I am sure of is I will try.”

Now, as he prepares to play his first match of the Asian swing at the China Open in Beijing, he is on the brink of achieving that No1 spot, yet still would not be drawn on the subject: “I don’t know what I need to do to become No1, but the only way I can do it is playing my best.”

In fact, unless the man he is trying to usurp, Novak Djokovic, falls anywhere short of defending his title this week, Nadal has only to play—not even win—his first-round match against qualifier, Santiago Giraldo. And even the title would not be enough for Djokovic should Nadal reach the final.

Based on the Spaniard’s remarkable achievements since he returned to the tour in February after a seven-month injury absence, the odds are certainly stacked in his favour. His 10 titles represent 61 match-wins to just three losses, and that doesn’t count his 6-0, 6-0, 6-4 demolition of Sergiy Stakhovsky in the Davis Cup play-offs just days after Nadal’s back-to-back Montreal, Cincinnati and New York victories.

Yet when Nadal made his return to the tour in Vina del Mar in Chile—where he suffered one of those three losses in the final—he stood at No5 in the rankings, his lowest since winning that first French Open in 2005. His climb to his present No2 finally came with his unparalleled success on the North American hard courts this summer, but in the race—the measure of success during the 2013 season—he already led the field.

This week, Nadal may trail Djokovic by 260 points in the calendar rankings but he heads the Serb by almost 3,000 points in the race—and will very soon head him in the rankings too, if not in Beijing then after Shanghai next week.

And while he may prefer to stave off questions about it, Nadal, just as much as Djokovic, will have seen the writing on the wall. He is not only poised to reclaim the No1 ranking that he lost to Djokovic at Wimbledon 2011 but is on course to claim the year-end No1 trophy that has also been in Djokovic’s hands for the last two years.

Even so, Nadal remained keen to play down talk of the No1 spot this weekend in Beijing: “[It] will be very tough to become No1, but if I am still playing the same way that I have the past couple of months, I hope to have my chance here or in the next few weeks.

“This year, even if I started a little bit later, I am completing a great season. I’m playing one of the best seasons of my career. That’s why I’m in a good position in the rankings.”

Nadal’s late start to the season may, as it happens, prove to be a blessing in disguise. There is very little that the 27-year-old Spaniard has yet to win in his career, but the World Tour Finals, formerly the Masters Cup, is one of them.

His best result came in 2010 when he lost to Roger Federer in the final, but in 2009 and 2011, he did not make it past the Round Robin stage. Missing the first month of the season may leave enough gas in the Spanish tank to carry him to the final prize of the year.

Certainly he has had many successes both on the Asian courts and in the closing months of the season—though the concluding indoor events have always posed his biggest challenge. He won the Beijing title back in that long and successful 2005 season, and took Olympic gold in the same city in 2008. He was runner-up at the Shanghai Masters in 2009, won Tokyo in 2010 and was runner-up there in 2011.

But although Nadal is assured of claiming the No1 ranking during this Asian swing—for just as in Beijing, Djokovic has to defend maximum points in Shanghai while Nadal can only gain points—he is certainly not guaranteed to deny his rival of either title.

Djokovic is unbeaten in three consecutive visits to Bejing: 2009, 2010 and last year. So while he acknowledged that Nadal has been the form player this year—the Spaniard has beaten him in their last three matches—he remained optimistic:
“No doubt [Nadal] has the best results this year…he’s been the best player in the world. I have been having ups and downs throughout this year. But still it was a quite good season for me, but it’s not over.

“I want to focus on this week’s China Open because this is where I traditionally play well, and I would like to have another successful week.”

He opens against the No46-ranked Lukas Rosol, and in the semis he could face Richard Gasquet, who has not won a set from him since 2007, or David Ferrer, who has beaten Djokovic just twice since 2007. However, his biggest headache is likely to come in the quarters, where he may find Stanislas Wawrinka.

The Swiss man, up to his highest ranking, No9, in over five years, took the Serb to fives sets in both their meetings this year. At the Australian Open, Djokovic survived 12-10 in the fifth while in New York, in Wawrinka’s first Grand Slam semi-final, Djokovic came back from two sets to one down. So while the Swiss has not beaten him since 2006, Wawrinka will be full of confidence this time—and driven by the opportunity to reach the World Tour Finals for the first time in his career.

Nadal should be unthreatened until the semis, where another man close to qualification for London awaits. Tomas Berdych, a formidable foe on hard courts, reached the final in Bangkok last week but, Nadal beat him at both Indian Wells and Cincinnati this year—though the latter was a tight 7-5, 7-6 win.

In short, though, this week looks set to end in a remarkable 38th meeting between Nadal and Djokovic, their fifth contest this year. But if it does, the No1 ranking will already belong to Nadal.