Singapore Grand Prix 2013: Sebastian Vettel insists he is not getting distracted by talk of a fourth consecutive world title after victory 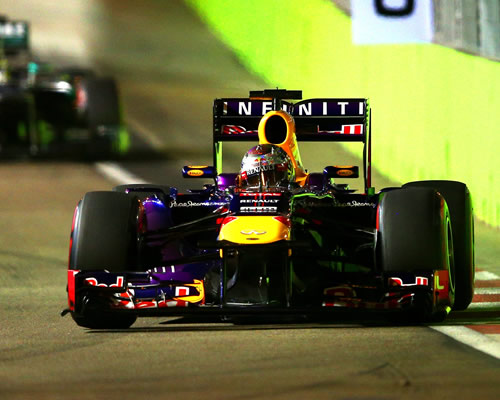 Sebastian Vettel insists he is not getting distracted by talk of a fourth consecutive world title after the Red Bull driver dazzled under the lights to take victory at the Singapore Grand Prix.

The Red Bull driver finished ahead of Ferrari’s Fernando Alonso at the Marina Bay Circuit to take a 60-point lead at the top of the drivers’ standings, with only 150 more available in the year’s remaining races.

Reflecting on his win on the podium, Vettel said: “To be honest I am not looking at the championship too much.

“I am just enjoying it at the moment, days like today and yesterday are what it is all about.

“Like I said these things don’t happen by accident, it is down to a lot of hard work from the team.”

The German continued: “The start was quite hairy, Nico [Rosberg] had a better start than me but thankfully he went a bit too deep and I was able to recover which was very important. The car was incredible and it was a pleasure to drive it round this crazy track.

“This is a long race so there are a lot of things that can go wrong so you can’t afford to lean back. At the end I was just controlling the gap. It was hard work out there but we like it because it is one of the most challenging tracks.”

Vettel was booed once again as he was interviewed on the podium, to which the German responded by smiling and saying: “They’re on tour, they go around on a bus.”

Alonso was pleased with his second-place finish and said Ferrari now have “nothing to lose” in the race for the title.

“It was a fun start and we knew we didn’t have the pace today so we had to invent something with a different strategy from the other teams. It paid off at the end.

“We are in a position in the championship where we have nothing to lose. We pushed, the car performed well and the fans pushed us too.”

Vettel’s team-mate Mark Webber ended up 15th after the Australian, who was in fourth place, stopped on the last lap with a burning engine.

Fernando Alonso wants to end his Formula 1 career at Ferrari

Relief for Bradley Wiggins after clinching Tour of Britain win