Singapore Grand Prix 2013: This was Sebastian Vettel's most dominant drive of the previous six victories this season 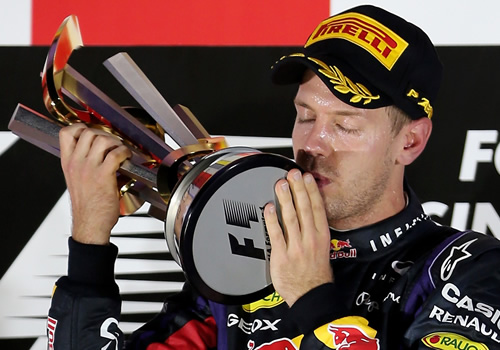 Christian Horner is a master when it comes to coming up with superlatives when discussing Sebastian Vettel following any victory.

Following the German’s dominant triumph under the lights in Singapore, a victory so crushing his winning margin was double that of any previous win this season, his team principal simply couldn’t help himself. “Phenomenal.” “Outstanding.” “Remarkable.” “Devastating.”

In truth, he could have gone on and on, and he would have been justified in doing so.

Forget those dominant displays in Spa and Monza over the last month – this was another level for the German, and unquestionably this was his most dominant drive of the previous six victories this season.

Vettel’s tactic is well-known; retain the lead at the start and control it from there. And yet, in the grand scheme of things, it was the German’s start that was the only minor blotch on what was faultless effort.

Uncharacteristically slow off the line, he allowed Nico Rosberg to take the lead of the race for all of fifty metres. Unfortunately for the neutrals, Vettel’s conservative early braking in comparison to Rosberg allowed his compatriot to cut back inside to reclaim the lead. From there, his lead only increased. 1.9 seconds clear after the first lap, 4.2 after lap two and 5.6 the lap later. To reiterate Horner, it was truly remarkable.

Singapore is unique. It’s hot, it’s humid and it’s bumpy. With these three characteristics, the demands it asks of the drivers are some of the toughest on the calendar. With these demands, Vettel’s victory looks all that more special, and even a mid-race safety car couldn’t upset his march. Not many race victories of such margins have included a mid-race safety car – just think about that when mulling over this particular result.

Not only was this Vettel’s most dominant display of the year, it was perhaps the most dominant of his career – you only had to look how he built up his leads at both the start and following the safety car. All the while, it was a typical struggle for a certain team-mate in the same machinery. As Vettel crossed the line for win number seven, Mark Webber was parking his car halfway round his final lap. When it comes to comparing the fortunes and misfortunes between the two, one just couldn’t make it up.

Formula 1 has seen it before. Think a younger Michael Schumacher at both Benetton and later Ferrari; ditto Nigel Mansell in that marvellous 1992 campaign, and even Fernando Alonso trouncing Giancarlo Fisichella on the way to a second world title despite knowing he’d be leaving the team before the season even began.

Vettel may be the sport’s unfortunate boo-boy, but despite this, the fact that he’s managed to find more grip, more down force and of course, more speed in comparison to his team mate is nothing short of exemplary.

Behind Vettel in second for the third race in a row, Alonso couldn’t help but grin as soon as the crowd stopped booing to cheer for their man. Once again, Alonso’s drive to second was bittersweet; making one continue to question which direction the championship would have gone if only the Ferrari had a better overall package.

The Spaniard will continue to fight until it is mathematically impossible, everyone in Formula 1 trusts him to do this, but even the man himself knows where this championship is heading barring an extraordinary series of flyaway races down the line.

Driver of the weekend: Vettel. Dominant on Friday, Saturday and Sunday – this truly was the performance of all performances. So supremely confident the German was on Saturday, he decided to sit out a final qualifying run in a move that just about paid off. In reality, it was a move that epitomised the 2013 season, and how he’s managed to win more than half of the races contended this season. Honourable mention must go to Kimi Raikkonen in driving to the podium from outside the top ten despite suffering from a bad back all weekend.

Good weekend for: Fernando Alonso’s second place despite another uncompetitive qualifying ensures the Spaniard keeps the championship alive; Sergio Perez for scoring an eight place finish despite rumours of McLaren looking to offload the Mexican refusing to go away, and Max Chilton, who scored a rare personal victory over his team-mate Jules Bianchi.

Bad weekend for: Paul di Resta, who suffered yet another disappointing weekend which will not help his position in the driver’s market and Mercedes – who once again fell foul of their Pirelli tyres which led to a complete lack of competitiveness.