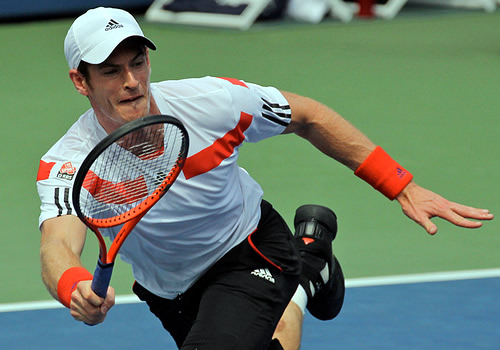 Andy Murray is through to round four for the sixth time in New York Photo: Marianne Bevis

Still the only member of the ‘big four’ to play a first-week match away from the big stage on Arthur Ashe, Andy Murray, the US Open defending champion, played his third-round clash back on the big stage.

He has, in the opening week, been forced to make more adjustments than his biggest rivals.

His first match—delayed by rain—was played late in cool conditions under the lights of Ashe. Having expected an afternoon match, he had to fit in a quick practice session under the lights before taking on, and beating, the fast and furious left-handed serve-and-volleyer, Michael Llodra.

His second match was on the higher-bouncing Louis Armstrong on a hot and humid afternoon, this time against the bigger-hitting right-handed game of Leonardo Mayer—who also opted to attack the net rather more than a clay-courter might be expected to do. Murray dropped the third set, but upped his level to win, in the end, with a comfortable 6-1 fourth set.

Now he would have to adjust back to Ashe—not under lights this time but under a heavy, humid sky and against a man whose game does not fit into any box at all, Mayer No2, Florian.

Asked about adjusting to playing on Armstrong: “It’s a court I haven’t played my best tennis on, that’s for sure. And, also, I think the conditions—well, it’s day and night, isn’t it? It’s completely different. The ball is bouncing extremely high out there at the beginning, and he’s a big hitter of the ball. Yeah, I’ve had some tough matches there in the past, and today was the same.”

And about adjusting to a very different style of opponent: “He’s very tough. He comes to net a bit. He has a good slice backhand, but he hits it with two hands, which isn’t how normally you’re taught to play that shot. He has very good feel up at the net. Hits a lot of drop-shots. He’s a pretty flat ball-striker. He has sort of huge, looping strokes. It can be tough to time your split step and know when he’s going to make contact with the ball. Yeah, he’s caused a lot of guys problems over his career. I’ll need to play well to beat him.”

Mayer, though currently ranked 47, is a former top-20 player and has indeed taken some big scalps when his varied tennis has come together. But he is also a temperamental performer, and this year had not beaten a top-50 player until the home clay of Hamburg, the best being No26 Alexandr Dolgopolov.

He then beat No41 Bernard Tomic in Montreal, his only glimmer of form on the hard courts this year, and this third-round showing equalled his best ever in New York. But on clay, he did challenge Murray hard in Madrid this year, losing two tie-breakers—but that was in the context of back problems that subsequently forced Murray to retire in Rome and miss the French Open.

So for the defending champion, it would all be about adjustment—and he squeezed in a practice on Ashe a couple of hours before the match: It was hard to see an upset.

By the time they began play, the sun was trying to burn through the clouds and it was, in short, sweltering. So by the time the first six-minute game was done, both were drenched in sweat. It began with a drop-lob combo from the serving Mayer but then Murray twice had calls against him that proved to be in. Even so, he earned two break points with some inch-perfect returns but Mayer held.

Mayer plays an unorthodox style of tennis, with masses of slice on both sides, drops shot and great angles, low over the net, from the baseline. Murray countered with similar shots—he too has very fine slice skills—and neither man could break through.

As the set headed to a tie-break, Murray looked increasingly distressed, his head drooping between every point, and a trudge to other side of the court. He even bent over double in his chair at the change of ends. Yet he came out, held to love and then cruised through to take the tie-break, helped by a flurry of Mayer errors, 7-2.

It had taken 54 minutes of draining tennis, but the next set would take just half an hour. Mayer went off the boil, and Murray fired off two cracking return of serve winners to break for a 2-0 lead. Murray immediately faced a break back point as a result of a double fault, but produced some big serve winners, 3-0.

After a weak opening to the set, Mayer now served out to love, Murray unable to get a return in play, but Murray did the same, and the super-short exchanges continued until the eighth game, another break for Murray and the set, 6-2.

Murray, now capless, still looked drained between points but it seemed not to affect his tennis. Indeed, he continued to fire in winners consistently—13, 14 and 15 in each set. One look at Mayer’s equivalent stats showed just why the match had turned so decisively in Murray’s favour: After 13 winners in the first set the German managed just four in the rest of the match.

Murray was clearly determined to finish this off as quickly as possible, and dropped just five points on serve, breaking twice, to make a clinical finish, 6-2, in a minute under the hour.

He stressed afterwards just how challenging the conditions had been: it was sweat-inducing simply watching! But he thought things had cooled a little after the first two sets—perhaps the reason he was able to play more freely.

“It was very tough conditions,” said Murray. “It was very, very humid. With the way that he plays, it was a tough match, especially the beginning. But I started the second set well and started hitting the ball a little bit cleaner. I was more aggressive after that, and I finished it well.”

Next up for Murray, in a quarter that opened up during the first week with the loss of the No15 seed Nicolas Almagro and No28 seed Juan Monaco, is the unseeded Denis Istomin—a man finding some good form since hitting the hard-courts of North America.

“Technically he’s very sound,” said Murray of Istomin after the win. “He’s a good player. He hits the ball very flat. He served extremely well today I think in his match. He had a very good match with Novak in Montreal and he’s had some good wins this week, as well.”

Further down the line, things are scheduled to get a whole lot tougher. The quarters pose the winner between No5 Tomas Berdych—and the big Czech beat him in Madrid and Cincinnati this year—and No9 Stan Wawrinka, who beat Murray in Monte Carlo and in a memorable contest here in 2010.

Beyond that lies the man Murray has faced in the last three Grand Slams he has played, No1 Novak Djokovic. He beat the Serb here last year and again in Wimbledon, with Djokovic taking the Australian title.

The Serb has made seamless progress through a quarter in which only two other seeds from the original eight remain, and he cannot meet either before the quarters.

US Open 2013: Azarenka’s relief after fighting back to beat Cornet