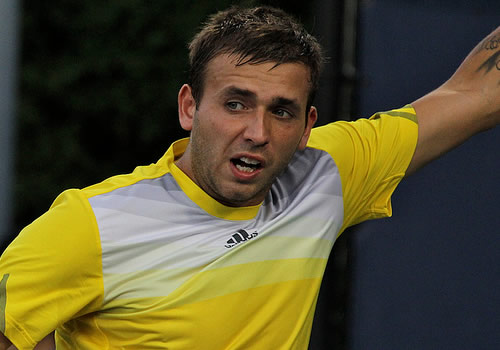 Just hours before Briton Dan Evans began his third-round match, the US Open published some statistics about the state of the men’s draw. And there was Evans, mentioned twice.

Third in the list, below the youngest remaining player, Jack Sock, and the oldest, Tommy Haas, was the lowest-ranked remaining man: Evans, at 179. It was followed by the names of the only remaining qualifiers—and there was Evans again, alongside Mikhail Kukushkin ranked 172.

Not that the giant-killer from Birmingham needed any confirmation of his new-found fame. After beating No11 seed Kei Nishikori on Court 13, he played his next match on the small, new show court 17, beating young gun Bernard Tomic. Now in the novel territory of a Grand Slam third round, he was promoted again, this time to Flushing’s second court, Armstrong—where compatriot and world No3 Andy Murray played the day before.

Such attention might turn the head of some players in Evans’ situation—especially when the likes of Roger Federer’s team sends out an invitation to practise—but this laid-back 23-year-old has taken it in his stride.

Yet a year ago, Evans was hovering around 400. At the start of 2013 he was still at 297, slipping to 367 in the spring. Then things took off, and the man who has admitted to not having worked hard enough—and had his LTA funding cut as a result—had made huge strides in the space of a few months.

After winning the decisive rubber that took GB to the Davis Cup World Group playoffs, he went from Futures wins to the third round at Queen’s to two straight Challenger finals in North America. And so to his ground-breaking run at the US Open: Three qualifier wins and two main draw wins.

And his next opponent was certainly beatable, a man once ranked No5 many years ago but now at 22 after missing five months with a leg injury last year. Tommy Robredo’s comeback, at the age of 31 however, was impressive. He started the year outside the top 100 and had won two titles this season, though as Evans rightly pointed out, his biggest successes had come on clay.

Evans not only enjoyed the pleasure of a floodlit show court but the vast support of those who settled down to watch, and no wonder. After dropping his opening serve, he tossed his racket aside and promptly broke back. It became clear what his style of play and tactics were: a blend of craft, variety, touch and spin and a determination to attack at every opportunity, regardless of who was serving.

Robredo too, also with a single-handed backhand, has a glorious cross-court shot on that wing plus killer slice and, like Evans, a surprisingly big serve.

At 3-3, Evans went after the Robredo serve to earn break points but the Spaniard resisted, though he was clearly breathing heavily. There was also a suggestion in his movement that he was struggling to move freely to the forehand wing…could Evans take advantage?

Having twice fought off break points, he almost roared his way to a break at 5-5. Robredo resisted, slowing down the play between points, and in the tie-break, a couple of wayward forehands gave Robredo the small margin he needed to close out the set, 8-6.

Now Robredo went off court—perhaps to take painkillers, for certainly when he returned, he seemed to take on a new lease of life. Evans, increasingly tense, lost concentration for almost the entire set, firing errors in every direction, and Robredo took it, 6-1.

But just as he had against Tomic, Evans found a second wind and his old attacking ways in the third. With Robredo also playing at his peak, this was a high-class phase of the match. The Spaniard twice held to love with aces but at 4-3 and deuce, he fell. Evans held and brought up a break point with a glorious high backhand volley. He served out with an ace for the 6-4 set.

Once again, there was a long delay before the next set got under way. Robredo called for the trainer but there was clearly come confusion over the injury, and the set continued amid complaints but no treatment.

Finally at 2-1, Robredo had his medical attention but Evans was clearly less than amused at the repeated delays, and it fired him to greater, and faster, tennis. He held serve with ease and applied the pressure again at 2-2, racing to the net for yet another volley finish. He had the break and Robredo looked out of ideas.

Yet he came straight back at the Briton, bringing up break point with a glorious cross court forehand, but they pounded through five deuces until Robredo got another chance and this time he made no mistake: 3-3.

The next game was more of the same, each playing lights-out tennis to get past the other, but the younger man, now looking full of bounce and running, got the break and this time held with ease. The pressure and pace was telling on Robredo as he served to save the set after almost three hours, but save it he did, with the most exquisite backhand angled volley.

Against the flow, Robredo now surged to 6-5 in a flurry of serving winners, and Evans played one too many serve-and-drop combos. At break point, Robredo chased one down, returned it and then picked off an attempted lob with a quick-fire backhand volley winner. It was a spectacular point with which to win a match, one of the finest points in a match jam packed with creativity and shot-making.

Robredo described Evans as “obviously a great player” but admitted that he was not now in perfect physical shape. That did not deter him from expressing his hope for the outcome of the match that was about to start on Arthur Ashe between Roger Federer and Adrian Mannarino:

“Hopefully Federer will win and I can play him…For the moment, he is the greatest player in the world and it would be a privilege to play him.” And that from a man who first played and lost to the Swiss 11 years ago, and has lost all nine matches since.

Evans will be disappointed that he came so close to the win. In the end, his all-out attack simply produced too many errors, 58 to Robredo’s 31. But he must surely be suffused with confidence at what is possible with a talent such as his.

US Open 2013: Azarenka’s relief after fighting back to beat Cornet