US Open 2013: Lleyton Hewitt is beaten by Mikhail Youzhny in a five-set, fourth-round thriller at Flushing Meadows 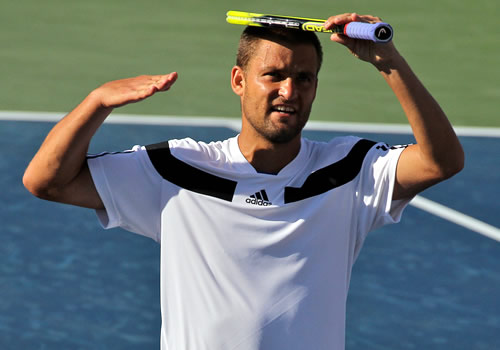 It’s that stage of a Grand Slam when the devoted tennis fan needs at least four sets of eyes and a very sharp brain to keep tabs on the unfolding dramas across the wide acres of a tournament’s site.

The ‘big’ match of the afternoon, on a day that would conclude the line-up for the quarter-finals of the US Open, was between the No1 player in the world, the Australian Open champion, the runner-up here last year and at Wimbledon just a couple of months ago. Novak Djokovic puts bums on seats, but in all honesty, there promised to be little tension and precious little chance of an upset against the 43-ranked Spaniard Marcel Granollers.

They had played only once before—a near-whitewash at the 2011 Australian Open—but that was of little significance in the narrower frame of this year’s Open. Granollers had taken five sets to win all three of his previous matches—and played two rounds of doubles too—and now aimed to reach his first Major quarter-final. Djokovic was aiming for his 18th consecutive Grand Slam quarter.

It took Djokovic half an hour to win the first set, 23 minutes to take the second.

But across the site on the Louis Armstrong court, where most of the seats are not allocated—it’s the fans who get there first and wait the longest who get the best view—there were two different men fighting for their own place in the quarter-finals. Indeed they were fighting for the dubious pleasure of playing Djokovic, but also for the thrill of the fight, the roar of the crowd, the honour of being among the last 16 in a Grand Slam.

The No21 seed Mikhail Youzhny had reached the semis here twice before, in 2006 and 2010. He is a player who compels by his personality, his intelligence, his picture-book single-handed backhand. He has drawn blood from his own head in fury, his look can strike you down at 50 paces, his angled slice can defuse the most offensive player, but behind the scenes he has graduated with a PhD at Moscow University and become father to two sons.

He played the unseeded Lleyton Hewitt, who won his first Grand Slam here in 2001. He went on to become the youngest man to claim No1 ATP ranking and then won Wimbledon, yet his story is littered with injuries and surgery: hip surgery—on both hips—foot surgery, groin injury and more foot surgery. He was ranked 160 a year ago, but arrived here at No66 this year, and showed his pugnacious fighting spirit in beating the 2009 US champion, Juan Martin del Potro, in five sets.

He seemed to retain all the mental and physical determination that he had the day he won here 12 years ago. Yet away from the court, he too is the father of three children.

The two men shared a couple of other things too: Both had reached the quarters or better in all four Grand Slam, two of only 12 active players to do so, and both were, in their 30s, playing as well as they ever had.

The scene was set, then, for what became the real ‘match of the day’. It had a rhythm, it had a tension, it mixed placement and spin and angle with zipping ground strokes, and displayed remarkable speed of foot and reactions.

The first set went Youzhny’s way, the second to Hewitt. The third could have gone either way, as both men worked two breaks of serve. Hewitt broke after a scintillating 46-shot rally to serve for the set, but Youzhny defended a set point and forced the break back and a tie-break. Hewitt went into overdrive and surged to the set, 7-3.

The momentum was with the bustling Australian, and he used it to break for a 3-0 lead in the fourth. But the Russian—often in his career a wayward finisher in tight contests—broke back, held and broke again to love. He levelled the match, 6-4. 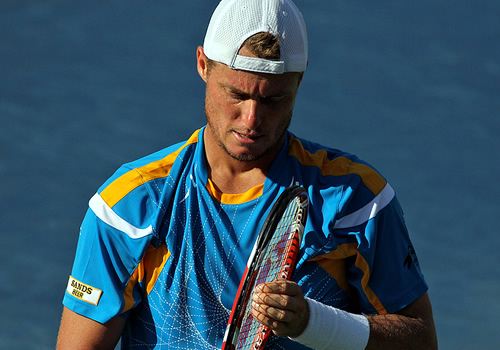 In the best Shakespearean tradition, the drama would be concluded by a fifth act. It had partisan crowds with, from one side, “Aussie, Aussie, Aussie”, from the other “Come on Misha”. It takes plenty of volume to drown out the screeching of metal from the goods trains arriving alongside Flushing Meadows, but Armstrong had the measure of any goods terminal.

Waves of cheering greeted first one break and then another to Hewitt, for a 5-2 lead. But Youzhny twice held serve and twice broke to hold a 6-5 lead, and he made the decisive break for the match after four hours of glorious, fast-paced tennis.

Words do little to convey the determination, the athleticism, but above all the intense beauty of such gladiatorial and sporting conflict. The statistics help to add another dimension, though. Youzhny hit nine aces to Hewitt’s eight. He served 145 balls to Hewitt’s 146. His fastest serve was 122mph, identical to Hewitt’s. He got 111 returns in play to Hewitt’s 109. In the final set, one hit 15 winners, the other 16, with errors lower on both sides.

And the bottom line: after all the drama, all the sweat, it came down to one point: Hewitt, in a cruel final twist, won 146 to Youzhny’s 145.

It deserved to be played on the big stage to the biggest audience, but then the energy that is generated by the full cauldron of Armstrong is a special experience. Perhaps it was in the right place after all.

And the Djokovic match? A mere 79 minutes, 6-3, 6-0, 6-0. An impressive scoreline from the former champion, and a warning bell to Youzhny—but I know which match I chose to watch.