US Open 2013: Novak Djokovic sets up repeat of Australian Open thriller against Stanislas Wawrinka with win over Mikhail Youzhny 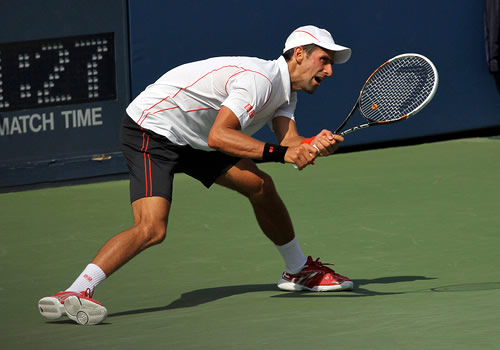 So one former champion, Rafael Nadal in 2010, and two men who had never reached the semi-finals at the US Open before—Richard Gasquet and Stanislas Wawrinka—had filled three of the remaining four places in the draw.

Competing for that last place, and the chance to play Wawrinka, were the 2011 champion, Novak Djokovic, and a man who had reached his only Grand Slam semis at this tournament. In fact Mikhail Youzhny had reached the last four in New York twice before, in 2006 and 2010.

Despite his previous success, though, things did not look good for the 31-year-old Russian. Djokovic was bidding to reach his seventh straight US Open semi, his 14th consecutive Grand Slam semi—he is already second behind Roger Federer for the most consecutive semi finishes—and his 18th straight Major quarter-final. And he was already one of three Grand Slam titlists this year, taking the Australian Open and losing in the final at Wimbledon.

The Serbian No1 was the only player left in the draw yet to drop a set, though he had also yet to face a seed. His biggest threats had fallen by the wayside: No6 Juan Martin del Potro, No12 Tommy Haas and early young hopefuls, Grigor Dimitrov and Benoit Paire. Even so, his scorelines were impressive. He dropped, five games in his first match, four in his third and three in his fourth. And while Benjamin Becker pushed him to a first set tie-break, he lost the next two games, 6-2, 6-2.

In contrast, Youzhny had beaten a very tough sequence of players: Alexandr Dologopolov, Haas, and the former champion Lleyton Hewitt in one of the matches of the tournament. The Russian played his finest all-court game of angles, alternating slice, the occasional net play and great transitioning from defence to attack to fight back from two sets to one down: But his game is a perfect foil to the Serb’s.

From the back of the court, Djokovic can generate just a bit more zip, a bit more top-spin and more depth and penetration. He has also become more skilled and more eager to play at the front of the court, and has always had great hands when it comes to drop shots and deft angled volleys. Add in the most flexible movement in tennis and rapier-like reactions, and his athletic game can be countered by few men.

In this night match, to a packed Ashe stadium, Djokovic faced down two break points in the first game only to turn the tables on Youzhny to break to love.

Djokovic never looked in trouble again until he was ready to serve out the set, and Youzhny, now into a better rhythm from some fine probing rallies, drew a couple of errors and a break point. Now those Serbian reactions proved themselves with a remarkable reflex pick up of a Youzhny smash, and he roared at his box as though he had won the match rather than the 6-3 set.

Things looked worse for the Russian in the second set, fending off deuce in his opening game and the suffering another early break to go 3-1 down. Again Youzhny had a chance to break back, but while his baseline game was solid, he consistently found it tough to break through the remarkable defence of Djokovic. The Serb broke again and took the set, 6-2.

Youzhny then had the temerity to find the form that beat Hewitt earlier this week, and took advantage of a lapse in concentration by the Serb. The crowd was right behind the Russian, delighted by his bold attack, his rapier single-handed backhand and his gruff fighting temperament. The night crowd is always a lively one, with endless coming and going, taunting shouts and distractions, and it seemed for a while to get under Djokovic’s skin. The two men broke each other, but Youzhny managed a second break, taking advantage of 16 errors to only six winners from the Serb, to win the set, 6-3.

Djokovic was stung, and he retaliated in the best possible way: a 6-0 set in under half an hour.

He afterwards credited Youzhny with a strong performance that had taken the first set from the Serb in the tournament:

“Well, it was never going to be an easy match against Mikhail…I was aware of his qualities and ability to come back to the match. So, you know, after I lost third set I definitely tried to regroup and focus on every point individually…For some reason I allowed him to come back into the match, started to push the ball, being more passive, and allowing him to step into the court, come to the net. He was playing well, no question about it. He was not making any mistakes. I started making a lot of unforced errors, and the match turned around.”

Inevitably, he went on to talk about his forthcoming semi-final against Wawrinka, in what will be their first meeting since one of the matches of the year at the Australian Open. Djokovic sealed it, in five hours and five sets, 12-10 in fifth. Wawrinka had earlier credited his burgeoning confidence and performances this year to that very match: proof that he could live with the ‘big boys’.

Djokovic was clearly impressed not only by that match but by Wawrinka’s form in this tournament:

“It’s definitely one of the most exciting matches I have played in my life on this surface, against Stan, that played on a very, very high level. You know, in the past we all knew that he has the quality to play that well, but not in a consistent basis. And now he worked I think on his movement a lot, and some variety of his shots in the game.

“He’s a very complete player. He can play equally well on any surface. He had one of the best seasons I think in his life. It’s going to be a very close match for both of us…He showed today why he deserves to be in top 10 of the world. He won in straight sets against the defending champion and he probably played one of his best tennis that I’ve seen him play on hard courts.

“But I feel also quite good on the court, quite confident, and hopefully I can continue in the same way.”

It may not be another Murray-Djokovic Grand Slam face-off, but the Djokovic-Wawrinka semi could prove to be just as thrilling. That, and the Rafael Nadal vs Richard Gasquet semi, will be played on Saturday.