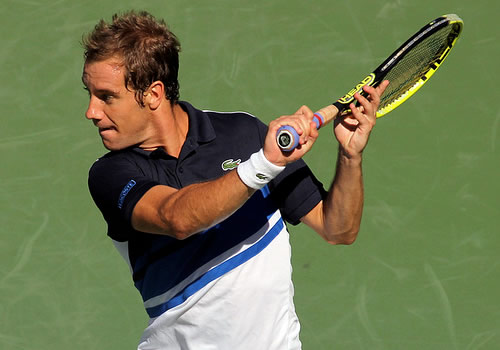 Richard Gasquet is through to the last four at Flushing Meadows Photo: Marianne Bevis

There have been some seismic shocks along the way—Roger Federer losing to a man he had beaten in all 10 previous matches, Juan Martin del Potro falling in the second round, and the highest seed, No5 Tomas Berdych, falling in the fourth round—though his match against the No9 seed Stan Wawrinka was always going to be a tussle.

But come the quarter-finals, each section was headed by its rightful seed: No1 Novak Djokovic, No2 Rafael Nadal, No3 Andy Murray, and No4 David Ferrer.

For the first time here since 2006, four single-handed backhands had reached this stage—one in each quarter.

There were three over-30s in the line-up, distributed across three of the quarters.

And there were three men from Spain—all concentrated in the bottom half. And the men in this half would be the first to make their case for the semi-finals.

Though an all-seeded affair, it had a distinctly fresh look to it. While Nadal had made it safely through to his allotted place along with fellow Spaniard Ferrer, the other two, No19 seed Tommy Robredo and No8 seed, Frenchman Richard Gasquet, were making their first ever US Open quarter-final appearance.

The first match, on a glorious sunny afternoon, pitched Ferrer against Gasquet, a man he had beaten only once in nine meetings, and that over five years ago. The Frenchman, so full of flair, made headlines with a string of titles and two Masters finals by the time he was 20, but had struggled to cope with the pressure of expectation and fame.

This year, he won two hard-court titles and reached the semis in Miami with a win over Berdych. Here in New York, he scored a brilliant victory over No10 seed Milos Raonic, 7-5 in the final set—the longest match of the tournament.

Would that be telling against Ferrer, one of the fittest, most endlessly competitive men in tennis?

The Spaniard, buoyed up by overtaking an absent Nadal in the rankings at the start of the year for the first time in his career, hit a career-high No3 this summer after 43 consecutive Grand Slam appearances. And his performances at Slams was just getting better and better. He reached at least the quarters in his last eight Slams, one of only five active players with the ‘big four’ to do so. What’s more, he reached the semis of three of them and his first Major final at Roland Garros this year.

Ferrer, too, had survived a marathon in the fourth round, four hours against Janko Tipsarevic in four sets. Indeed, Ferrer had spent precisely one minute more on court getting to this stage than Gasquet. But that did not deter either of them from putting on another long and dramatic show for a hugely appreciative crowd.

Gasquet came under pressure in the very first game, surviving three break points, while Ferrer held to love with an ace. That, however, was a misleading start, as the Gasquet single-handed backhand, surely one of tennis’s most aesthetically glorious shots, fired a series of winners down the line to break in the fourth. After 19 minutes, he led 4-1, almost broke again in the eighth, but served out with style, 6-3.

It had been fast and furious: Ferrer the eternal chaser and, latterly, a more aggressive and forward-moving player; Gasquet the artist, prone too often to hang far behind the baseline but able to transition into attack with a paint-box of shots—and he did so eagerly in the first two sets. Who would have expected these two players to notch up a half-century of net approaches apiece? Yet Gasquet totted up 30 points from 45 at the net while Ferrer earned 38 points from 53 at the front of the court. That kind of all-court tennis, combining both defensive and offensive tactics, wins a crowd, and it had done so by the start of the second set.

Gasquet continued to have the Midas touch, breaking in the third game—playing one physics-defying drop shot that skimmed over the net only to spin back as Ferrer hurtled to reach it. A perfect lob earned a break in the fifth, and he completed the set with another, 6-1.

But if there is one quality Ferrer has in buckets it is fighting spirit and endlessly pumping legs. He took advantage of a lapse of concentration at the start of the third to break, and then broke down Gasquet’s resistance in the fifth game with three deuces to break again for a 4-1 lead.

Inexplicably, Ferrer received a code violation for coaching as he left his chair to serve—he appeared to need no help in making a comeback—and it broke his flow to give the break back. But although Gasquet held his next serve, he was lobbed to perfection in the next to concede another break.

Gasquet’s backhand returned with a vengeance to hold off another break point in the ninth, but Ferrer had control of the set and took it, 6-4.

Ferrer also seemed to have control of the match, undermining the Gasquet attacks by stepping inside the baseline. He broke in the third game and put up his signature resistance through seven deuces and three break points in the sixth, serving an ace to hold, 4-2. He rode his momentum to break again and served out, 6-2, to level the match.

If there has been a weakness in the Frenchman’s game since those early effortless successes, it has occasionally been his inability to close out a match, but with fellow Frenchman Sebastian Grosjean now in his corner, his self-belief seems to have grown as his game has matured.

They were poised at 114 points apiece and edged to 2-2 at three hours. But it was obvious that Gasquet had a second wind and a clearer view of what to do: get back to his attacking ways of the opening sets. Helped by a double fault from Ferrer, he broke through in the sixth game to lead 4-2, but the Spaniard put up a valiant fight, cutting short a 29-shot rally with a net attack to hold his serve.

Now came the final test, and Gasquet rose to it with Gallic flair, taking his first match point with a cross-court forehand out of the air. The clock said it had taken almost three and a half hours, but it felt half that.

He becomes just the second Frenchman in the Open Era to reach the semis in New York but it is the personal milestone that will buoy him up ahead of his next match against Nadal or Robredo. In reaching his first Grand Slam semi since 2007, he ends a run of 11 fourth-round exits at Majors to reach his first semi at the US Open.

His record against Nadal is 0-10, but he revealed that he had indeed scored a victory over his friend many years ago: “Last time I beat him, I was 13…I beat him only once!”