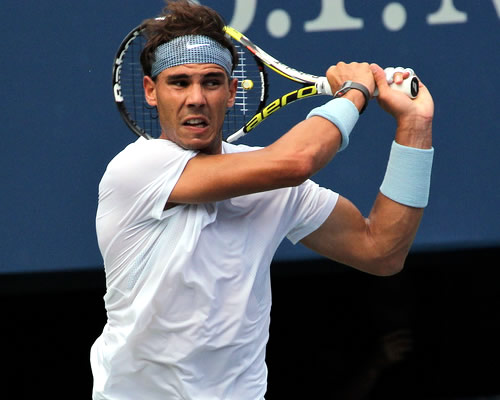 So the 128 were reduced to the final 16 by their target date of Labour Day in New York.

Some big names were felled along the way: No14 seed Jerzy Janowicz and No11 Kei Nishikori in the first round, No6 Juan Martin del Potro in the second round, No12 Tommy Haas and No13 John Isner in the third.

Nevertheless just three non-seeded players made it through, all of them in the top half, two of them in the Novak Djokovic quarter. It meant that the world No1 could avoid meeting any seed on his way to his allotted semi-final against Andy Murray—unless No21 Mikhail Youzhny beat Lleyton Hewitt. Murray, in his quarter, also avoided a seed until the quarters: He played Denis Istomin in the fourth round.

However, other high-ranked men also lurked in the Murray quarter. Tomas Berdych, at a career-best No5, is a Wimbledon finalist and playing in his 41st straight Major. He made straightforward progress without dropping a set, and lost only five games to the No31 seed, Julien Benneteau. A semi-finalist here last year, he still had one of the toughest routes to the quarters and then the semis.

First he would face No9 seed Stan Wawrinka, a former quarter-finalist here and at Roland Garros this year. The Swiss reached four finals this year, including his first Masters in five years, and won the Portugal Open title.

And although amid all the tennis to be played in a heavily rain-delayed fourth-round schedule, the buzz was mostly about that quarter-final—a highly anticipated first meeting in New York between Roger Federer and Rafael Nadal—the Murray quarter boasted an alternative almost as compelling. Berdych, should he beat Wawrinka, would meet Murray for the third time this year, and he beat the defending champion both times. The most recent was last month, in straight sets, on the hard courts of Cincinnati.

But this was the half to be played second. It was the bottom half, full of flair, maturity and single-handed backhands, that would provide the opening act, and what drama it was.

A heavily re-jigged schedule moved Federer from Ashe to Armstrong, where his opponent, Tommy Robredo, had won his third-round match just two days earlier. Federer had not played there since 2006 and had not lost there since his first time at the US Open in 2000. This was to change all that. For the first time in 11 meetings, the Spaniard came away the winner, in straight sets, against a lack-lustre Federer. It marked Robredo’s first advance to the quarters here in 12 attempts.

He was not the only one to score that landmark. The talented Frenchman, Richard Gasquet, playing in his 37th Grand Slam, had got past the fourth round only once, a semi finish at Wimbledon in 2007. Now, aged 27, he has done it again, his first quarter-final at the US Open. And it proved to be the most tightly contested match of the day, a four-and-a-half hour marathon that pitted the craft and touch of Gasquet against the power and pace of the tall young Canadian, Milos Raonic.

Gasquet will meet the No4 seed, David Ferrer in the quarters. The Spaniard, who has not fallen short of the quarters in his last seven Grand Slams, fours times reaching the semis and once going on to a final, scored a four-set win over No18 seed, Janko Tipsarevic, 7-6, 3-6, 7-5, 7-6, in just three minutes under four hours.

The impressive 31-year-old, playing possibly the best tennis of his long career during the last 18 months, is now only the sixth player in the Open era, after Nadal, Djokovic, Murray, Federer and Ivan Lendl, to reach all four Grand Slam quarter-finals in consecutive years. And he trails only Nadal and Djokovic this year for match wins.

The final man to reach the quarters in the bottom half of the draw was Nadal, who played the lowest remaining seed, No22 Philipp Kohlschreiber, though the 2010 champion didn’t have it all his own way.

The German played magnificent all-court tennis, his elegant backhand zipping through the court and his net game challenging Nadal right to the wire: the Spaniard made 23 points, the German 22 at the front of the court, in a hugely entertaining display.

Though Nadal dropped his first set of the tournament in a tie-break, he saved the only break point he faced during the match to maintain his unbroken record in New York this year. However, it took him well over three hours, 6-7, 6-4, 6-3, 6-1.

He next plays Robredo, who he has beaten in all six of their previous matches—though they have not met since 2009. It will take an extraordinary performance for the 31-year-old to change the pattern, but then that is exactly what he did against Federer.

First time in a US Open 4th round Granollers, Istomin

Into their first US Open quarter-final Robredo, Gasquet

Reached 4th round of all four Majors this year Djokovic, Ferrer

Playing in singles and doubles Granollers, Youzhny (both in 3R doubles)