US Open 2013: Roger Federer suffers a shock straight-sets defeat by Tommy Robredo in the fourth round in New York 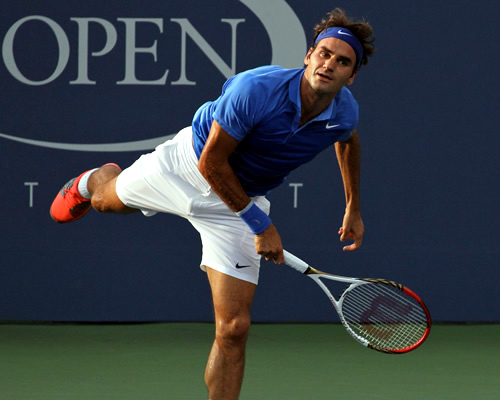 The warning signs were there for the five-time US Open champion, Roger Federer, right from the start.

He was scheduled to play in the heat of the late afternoon on Arthur Ashe, where he had played all his other matches thus far—three straight wins without dropping a set.

He played an old adversary, Tommy Robredo, also now in his 30s, who had played his last match on Louis Armstrong on a hot, sultry afternoon against Briton Dan Evans. He played a classy, creative and gutsy match in four sets, and hoped it would be Federer who won through to face him. He wanted, he said, to play the greatest man on a tennis court.

But everything would change. After several days of sauna-like humidity, the skies let loose torrents of rain through most of the afternoon and eventually, it forced a new schedule. The decision was to move Federer’s match to Armstrong, even though there was no other match due on Ashe.

The announcement was quickly followed by another: “The last time Federer played a US Open match on Louis Armstrong Stadium was in the 2006 fourth round against Marc Gicquel. Federer won 6-3, 7-6(2), 6-3.”

The reason was that Federer was looking almost a shadow of the man who had dismissed Adrian Mannarino for the loss of just five games. Robredo, on the other hand, was sharp, full of running and in control. Yet he had lost all of his previous 10 matches against Federer. This would be a shock indeed.

Robredo is, and always has been, a quality player. While only ranked 22 now, he had broken into the top five more than seven years ago. But a year ago, he was outside the top 200, sidelined for five months with a leg injury, and had worked his way back this season with two titles. And if there was any doubting his fitness, one look at his record-breaking performance at the French Open should have dispelled them. He played, and won, three consecutive five-set matches from two sets to love down against the likes of Gael Monfils and Nicolas Almagro.

With the humidity at a shocking 91 per cent and the court abuzz with crowds holding Ashe tickets but unable to find a seat, the match began in a similarly bizarre fashion. Federer’s timing was all over the place with his normally match-winning forehand flying long. Robredo broke.

The tactics were clear from the Spaniard. He directed the vast majority of his serves and groundstrokes at the Federer backhand, breaking it down to force errors. But he also annulled the Federer net attacks with his skimming single-handed backhand slice, forcing errors off the feet of Federer or passing him down the wing. It was fine and intelligent play.

Federer, for his part, was struggling both with his first serve percentage, with his timing off the ground, and with his finishing at the net: He made only 12 points from 21 approaches in this opening set.

After exchanging another break apiece, the headed to a tie-break, and Robredo surged to the set, 7-3, with an ace, no less.

The conditions were brutal, heavy and damp, and Federer has rarely looked more drenched. He changed his shirt countless times, and Robredo even called upon the boy kids to wipe the back of the court where Federer had left a trail of perspiration.

There were plenty of magic moments: The Swiss held his opening serve of the second set with a beautiful drop/lob combo. But again he failed to convert break chances in the next game, hitting two forehands long. Come the eighth game, some wild errors—first a volley, then two forehands—handed Robredo an easy break to love. And when the Swiss had Robredo at his mercy at the net in the next game, but yet again mis-fired on break point and the Spaniard roared his way back to his chair, 6-3.

Federer left the court, and Robredo followed—for a change of clothes, it appeared. Federer, usually the one setting the pace, was trying to slow things down, but his confidence appeared to be draining with his sweat. He went on the attack, had five chances to break—he had 16 in the match—but could not. Robredo was solid, consistent and the fresher of the men.

Sure enough, in the seventh game, another string of errors handed an easy break to Robredo and even with the entire stadium cheering him on, Federer could not regain the break or the match. The Spaniard scored a remarkable win, 6-4, and looked close to tears—not just for reaching his first US quarter-final but because of his opponent: “I beat the best guy of all time… in a place that he loves to play. I’m delighted.”

He later put his finger on what the difference had been this time to the previous 10 meetings: “Obviously Roger, when he was No1, to the Roger right now, he’s not maybe with the same confidence, no? Obviously he’s the same player and he plays unbelievable. But I knew that if right now I had a little bit more chances, maybe he will have a little bit of doubt, no?”

And Federer conceded that confidence had been a factor: “Confidence does all these things. It takes care of all the things you don’t usually think about, you know. But I just think it’s been a difficult last three months, you know. Maybe—how do you say—my consistency is just not quite there yet. Maybe on a daily basis, set-by-set or a point-by-point basis, maybe that’s something that has been difficult for me, you know.”

He cut a subdued figure, going through the motions, back on show for the media barely minutes after leaving the oppressive stage of Armstrong. He would brook no excuses, and certainly not about the court change: “That should not be the issue.

“I’ve waited for so many matches throughout my career. That’s definitely the last excuse you could find, you know. I’ve been practising on Armstrong, so there’s no excuse there either. I was prepared for it. I was even happy about it. I thought it was going to be a great atmosphere, that I could take advantage of maybe the fact that people were really going to get behind me. But unfortunately, I didn’t show the game that they could really get into and excited about.”

Nor would he blame the humidity: “It’s not like it’s just humid on my side and not on his. Yeah, it was a different type of court, atmosphere, surface speed, if you like. But then again, I know Tommy’s game really well. We’ve played so often against each other. There’s no secrets out there today. Credit to him for playing a good match today.”

The No7 seed, who will now drop points after reaching the quarters last year, wanted simply looked to the future: “I’ve definitely got to go back to work and come back stronger, get rid of this loss now as quick as I can, forget about it, because that’s not how I want to play from here on. I want to play better. I know I can. I showed it the last few weeks, that there is that level. But important for me, first and foremost, that I move better, that I play better.”

So the US Open is treading new ground in 2013. For the first time since 2000, Federer’s name will not feature in the quarter-finals, and for the first time in the same stretch of tournaments, Robredo’s will. Can the rejuvenated Spaniard reach his first ever Major semi? If he is, he will have to beat countryman Rafael Nadal—and he has never beaten him either.