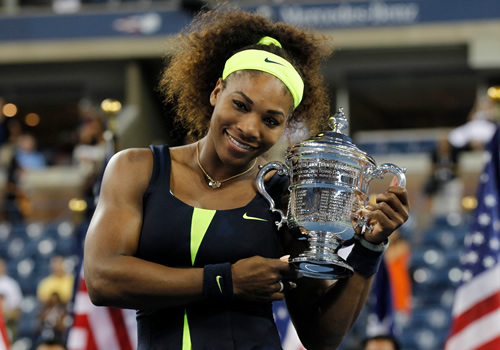 Serena Williams admits that she would have been “disappointed” with her year had she not won the US Open title on Sunday.

The world No1 battled past second seed Victoria Azarenka 5 6-7 (6-8) 6-1 to claim her fifth title at Flushing Meadows after having won the French Open earlier this year.

And the 31-year-old, who claimed her 17th career Grand Slam singles title in New York, says she would not have been satisfied with her season had she not won Sunday’s showpiece.

“I felt almost disappointed with my year, to be honest,” said Williams. “I won the French Open, but I wasn’t happy with my performances in the other two Slams, and not even making it to the quarter-finals of one.

“So I definitely feel a lot better with at least a second Grand Slam under my belt this year.”

Williams is now one singles Grand Slam title behind Chris Evert and Martina Navratilova for the second-most crowns of the Open Era – and five behind Open Era leader Steffi Graf.

And reflecting on her tally, she continued: “I never thought I would win Australia five times.

“That’s been really cool. Wimbledon is a little different. But this one I never seem to have won a lot before. Now I can finally say I have won this one a few times, too.

“Overall, it feels really good to have those multiple titles in each of those three, actually.”

At 31 years and 348 days old, Williams becomes the oldest US Open champion in the Open Era.

But she insists that she is still feeling “awesome” and has no intention of letting up any time soon.

“I feel great,” she added. “I’m happy that I’m first of all able to get to this age.

“A lot of people don’t make it this far in our world and our society. So it’s an honour. God willing, I will be 32 soon. I embrace it. I think it’s awesome. There is a whole new level of sport.

“Technology and things are different. You can continue to play for so many years and be successful for so many years. I have won this tournament over three decades, 1990s, the 2000s, and this one.

“You can only do that when you’re younger and older, so I’m happy that I have had this opportunity.”