US Open 2013: Andy Murray is beaten in straight sets by Switzerland's Stanislas Wawrinka in the quarter-finals in New York 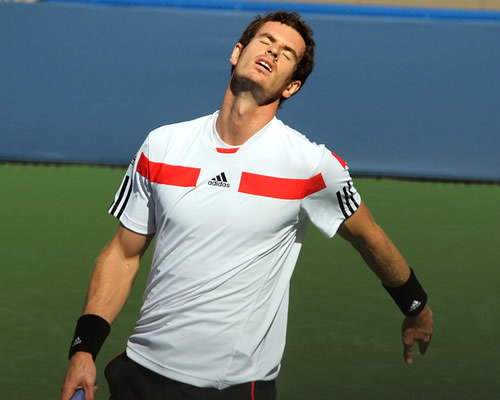 The final quarter-final day at the US Open featured the two men who fought for almost five hours in pursuit of the 2012 title: Andy Murray prevailed in the fifth set over Novak Djokovic.

This year, they had already contested the Australian Open and the Wimbledon titles, sharing the honours, but they would not compete in the title match again in New York. They were drawn, instead, to meet in the semis. Before that, though, they had one more hurdle to overcome.

Both former champions had enjoyed a less challenging run to the quarters than the draw had promised. Indeed both had avoided playing any seeds at all.

And even now, both had avoided what looked like their most dangerous opponents: Djokovic saw the 2009 champion Juan Martin del Potro fall in the second round; Murray may have been relieved to see Tomas Berdych fall at the hands of Stanislas Wawrinka. Six times in 10, Murray had lost to the big Czech, twice this year and most recently at last month’s Cincinnati Masters.

But in Wawrinka, who at No9 was seeded at his highest in a Grand Slam since 2008, he faced a formidable opponent.

The No2 Swiss had come through what, on paper, was a tougher string of players than Murray: Radek Stepanek, Ivo Karlovic, Marcos Baghdatis and, of course, No5, Berdych. He reached the quarters at Roland Garros this year, reached the final of the Madrid Masters among three other finals, and won the Portugal Open. Indeed he had put together more wins this year than compatriot Roger Federer, in whose shadow he has spent almost his entire career, a 40-15 match run thus far—and advanced further in a Slam than Federer for the first time.

But what made Wawrinka stand out as such a challenge were two things in particular. He had not only beaten Murray, 6-1, 6-2, on Monte Carlo’s clay this year but also at their last meeting in New York, in 2010. It was a stunning performance by the Swiss, almost four hours to take victory in four sets. He went on to reach the quarters here for the first time.

There was another important statistic: Wawrinka had put together a career-high six wins over top-10 players this season, all since April: Along with Berdych twice and Murray, they included Richard Gasquet and Jo-Wilfried Tsonga. Only Nadal and Djokovic had scored more. And at the Australian Open, Wawrinka very nearly took out the defending champion, Djokovic, in one of the matches of the tournament, losing 10-12 in the fifth set after over five hours. A shot across the bows if ever there was one.

And if Murray had any doubts about the challenge that faced him, it was very quickly dispelled. Wawrinka opened serve and had to work hard to hold but Murray had to work even harder. Wawrinka showed what his tactics would be: attack on his own serve and on Murray’s, and the Briton had to hold off three deuces. Wawrinka was then quickly into his stride, and what a stride it was.

He held his next game with a 136mph serve, a drop-shot and a volley winner. It signalled the variety and quality of his skills around the court, but more than that, he looked supremely calm and confident.

Murray tried stepping in, too, but again had to fend off deuce, while Wawrinka threw in his first serve-and-volley play to hold for 4-3. He held the next to love, playing smart tennis to break up any rhythm Murray tried to build.

The Swiss mixed up powerhouse serves with kick serves, chipped and chased in, and if Murray tried to take the net, passed him with the finest backhand in tennis—as powerful in top-spin as slice, as effective down the line as cross-court.

Serving in the eighth, though, Murray came back at him from 40-0 to deuce, but this new calm Wawrinka held without offering a break chance. In fact he did not offer up a break point in the set, unlike Murray, who was about to face a torrent.

A chip return of serve from Wawrinka—one of his most telling shots in the match—drew a backhand error from Murray. Twice the Briton saved break point with a big serve and saved the next with a volley. On the fourth deuce, Wawrinka punished Murray with a stunning backhand pass as the Briton attempted to come in again. Eight deuces would come and go before Wawrinka managed to convert a break point and he did it with a return of serve cracker that Murray could not control. The Swiss led 6-4; Murray received a code violation for smashing his racket.

The second set opened in a similar vein. Wawrinka opened with a serve-and-volley play and held to love. Murray, though, immediately faced deuce. Twice he was punished on a second serve with a blistering response and when a lob went long, Murray faced another break point. He survived, but again not for long.

Already the Ashe stadium was abuzz with the unfolding story and with the bold and attacking tennis being played by Wawrinka. And it was a treat to behold, except for Murray. He watched, near helpless, as Wawrinka served out the fifth game with a combination of clutch serving, net finishing and a down-the-line backhand winner. He then faced a Swiss backhand landing at his feet and saw a forehand shoot past him for the break, 4-2.

The next game brought more of the same—a 135 ace, a serve-and-volley winner, and a backhand that drew one more error. Wawrinka served out the set, 6-4, with an ace on his second serve.

Some shook their heads—in awe at the shot-making of Wawrinka, in shock that Murray appeared not to have the answers. The Swiss continued his tactics—and why would he not? Two more big serves and a serve-and-volley winner opened his third-set account: He had now made 27 points from 38 at the net and was nine-out-of-10 for his old-fashioned serve-and-volley plays.

Murray netted an easy volley in the third game to offer up break point but this time Wawrinka needed to do nothing. Murray double faulted.

Confidence breeds confidence, and leading by two sets and a break, Wawrinka looked entirely calm while Murray shrugged, gesticulated at his box, threw his hands up in despair as another cross-court backhand hit his baseline. He found a couple of moments of magic to fight off the first of two break points in the seventh game—a reflex volley winner—but that was not enough.

A chink of hope for the Murray faithful—and there were plenty of them pleading with Murray to find a way to defuse the Wawrinka game, led by Sir Sean Connery—appeared when the Swiss opened with a double fault and went 0-30. But he slammed the door with the next four points to permit himself a roar at last.

The effectiveness of the Wawrinka return of serve allowed Murray to win only 54 per cent of his first serves—an unusually low level by his standards.

But credit must also go to the Swiss not only for choosing such an offensive game plan against one of the best returners in the game but for executing with such precision, variety and clean hitting. Forty-five of his 107 points were outright winners, and he dropped only five points in 42 first serves. Not only did he not offer up a single break point but he faced only one deuce on his serve. It took Wawrinka to his first Major semi-final at the age of 28 and it was, in short, a performance worthy of that achievement.

Murray was back in the media centre even before his inquisitors. His answers were short and to the point: “He played great. He hit big shots. He passed extremely well. He hit a lot of lines on big points. He served well. That was it. He played a great match.

“I have had a good run the last couple of years. It’s a shame I had to play a bad match today.”

In retrospect, perhaps it is no surprise that Murray found it hard to produce the necessary intensity after fulfilling such a major goal in winning Wimbledon. And he admitted:

“Mentally, it was very challenging for me to play—you know, Wimbledon, the last few games of Wimbledon to you guys may not seem like much, but to me it was extremely challenging.”

He has struggled to produce his best since, finding little rhythm through the whole US Opens Series. He will, there is no doubt, bounce back…but for now, it is a dejected Murray who leaves New York.