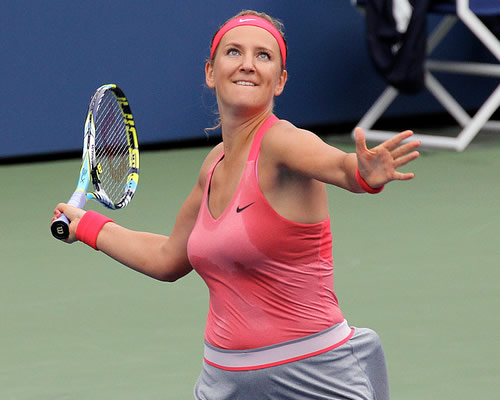 Victoria Azarenka is through to the quarter-finals in New York Photo: Marianne Bevis

The heavy rain over New York did more than simply disrupt the schedule: It threw the women’s draw into disarray.

The top half was done and dusted, four matches, four quarter-finalists decided, and the bottom half should have been completed by mid-afternoon the following.

Three of the four matches were first on court and one was completed in very short order: No10 seed Roberta Vinci took out her young qualifier compatriot, Camila Giogi, in 67 minutes—and not a moment too soon.

With the other two matches poised at the end of the second sets, the heavens opened and all four women had to kick their heels for four hours.

In due course, the unseeded Flavia Pennetta completed her straight-sets victory over one of the hottest players of summer, No21 seed Simona Halep. It was the Italian’s third straight victory over a seed.

And on Ashe, Daniela Hantuchova continued her resurgence with a win over the young home qualifier, Alison Riske, in a riveting three-set battle.

But where was the feature women’s match of the day, the one that pitted two Grand Slam winners against one another? It was schedules as second match on Ashe but, before play resumed, they had been sent home and rescheduled for the next morning—a full day after all the other quarter-finalists had been decided.

A measure of the popularity and quality of the two women could be measured by the numbers who turned up early to watch on America’s first day back to work and to school after Labor Day weekend. The thousands were rewarded with some sunshine and some sizzling tennis—though in truth, both players blew hot and cold as the match unfolded, both attackers eager to wrench control.

Ivanovic, the French Open champion of 2008 and one of seven players to have held the No1 ranking, was on something of a return to the form that fell away so dramatically after her precocious run in Paris aged only 20. Indeed her run to the quarter-final here last year was her first in a Grand Slam since that same Roland Garros.

Her rankings followed her losses, and she fell in and out of the top 20, but entered the US Open this year as the No13 seed. She reached the semis in two big tournaments this year, in Madrid and Carlsbad, but in the second, she lost to the woman she now faced in three sets. She also lost to Azarenka at Wimbledon.

Azarenka, for her part, was ranked second only to Serena Williams. She was the losing finalist here last year and the Australian Open, Doha and Cincinnati champion this year. With some injury problems put behind her, she was back to her formidable form—she beat Williams in Cincinnati—but Ivanovic was the first to take control.

The tall, elegant Serb, who enjoyed much of the support on Ashe, broke and rushed to a 3-0 lead. She loves to play an attacking game and when it works, it can be exhilarating stuff. But it is also risky tennis that brings almost as many errors as winners. And Azarenka is wont to go for her shots, too.

She stayed with the pace and took advantage of some wayward serving from Ivanovic to break with her own net attack. But in what became the trend for the match, the Serb broke straight back for the set, 6-4.

Those two breaks of serve extended to seven consecutive breaks as both stepped inside the baseline to receive. The first to hold was Azarenka in the sixth game and she broke again to take the set 6-3.

There was not much wrong with Ivanovic’s ground strokes, especially on the forehand. She cranked up a total of 24 winners on that wing, while Azarenka did not manage one until the third set. But in that third set, the high-stakes tennis of the Serb began to leak errors—11 of them on the forehand. And the pressure from the No2 seed also drew serving errors.

Azarenka, the more consistent of the two, held her opening serve, and that proved to be a vital advantage ahead of four more breaks.

Ivanovic finally held in the sixth to level things at 3-3 but dropped serve again to go 3-5 down. It became first-strike tennis, and Ivanovic’s powerful and crisp hitting brought another break as the match went past two hours. But two netted forehands gave Azarenka another chance to take the match, and she did, 6-4.

It was a long time coming, but it was worth the wait, one of the best women’s contests of the tournament and crammed with winners—41 from Ivanovic. But it also showed the great resilience of the wonderfully mobile Azarenka, despite making half as many winners.

Azarenka will meet Hantuchova in the quarters—one of a record five over-30s in a Grand Slam quarter-final. The others are Li Na, who faced No24 seed Ekaterina Makarova, the two Italians Pennetta and Vinci, who faced each other, and, of course, the oldest woman to hold the No1 ranking, Williams.

The home favourite continued the defence of her title against the surprise package, No18 seed Carla Suarez Navarro, and the petite Spaniard turned 25 on the very day she would take to court against Williams.

For some, that would be the worst of all birthday presents, but for a tennis player, there must be few more thrilling opportunities than a packed Ashe Stadium for the showcase night match against one of the greatest women ever to play the game.