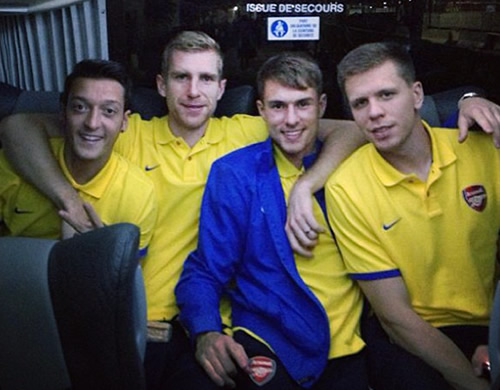 Arsenal moved two points clear at the top of the Premier League table thanks to a 2-1 victory at Swansea City.

Youngster Serge Gnabry scored the opener in the second half, before Aaron Ramsey fired home a second shortly after.

Ben Davies pulled one back for the home side but the Gunners held on to move two points clear of second-placed Tottenham.

Here are some of our favourite updates from the professionals, both past and present, as the north Londoners continued their fine form.

England legend Gary Lineker ‏(@GaryLineker) chimes in: “Arsenal are running away with the Premier League.”

Golfer Ian Poulter (‏@IanJamesPoulter) gives credit where it’s due as Davies pulls one back for the home side: “Have to give respect that was a great goal by Swansea.”

Lord Sugar (‏@Lord_Sugar) reiterates his belief that Wenger is the top manager in the English top flight: “Arsenal 2 up top of the PL. How many times do I have to say it? Wenger best manager in the PL. Double FACT!”

Liverpool legend Robbie Fowler ‏(@Robbie9Fowler) is happy to see Ramsey flourishing: “Pleased for Aaron Ramsey. Was at Cardiff with him when he was young, quality player then, even better now.”

Erik Lamela: I’m still adapting to life at Tottenham and in London