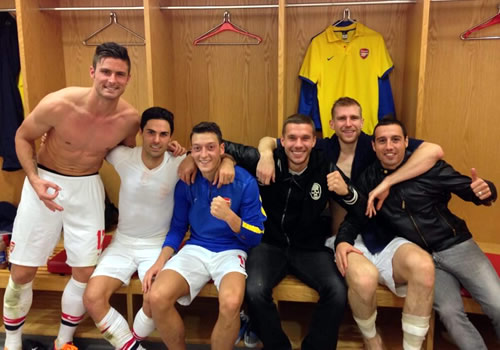 Arsenal moved top of their Champions League group thanks to an impressive 2-0 victory over Napoli at Emirates Stadium.

The Gunners took the lead through Mesut Ozil, before the Germany playmaker set up Olivier Giroud for his sixth goal of the season.

The Champions League clash inevitably prompted a flurry of activity on Twitter – and here are our favourite updates from the professionals, in chronological order.

Harlequins star Ugo Monye ‏(@ugomonye) is impressed by the Germany playmaker: “Ozil is operating on a different level #tekkers #UCL”

As is Ex-Norwich man Darren Huckerby (‏@hucks6dh6): “Ozil and Arsenal are on fire!”

And so does former Norway international Jan Aage Fjortoft ‏(@JanAageFjortoft): “If Özil was Norwegian we would have offered him a Royal title….”

Meanwhile, Lord Sugar ‏(@Lord_Sugar) asked Morgan to make an apology: “@piersmorgan REPEAT after months of slagging off Wenger.You need to Man up and apologise unreservedly for being a double barrel d**k head”

Former goalkeeper and ESPN pundit Shaka Hislop (‏@ShakaHislop) chimes in: “Spending the next week digging up tweets that came in to @ESPNFC from Arsenal fans after the Villa game saying that Wenger should be sacked.”