Jelena Jankovic has won 43 matches this year from 60 played, and will have to win three more to take the China Open title 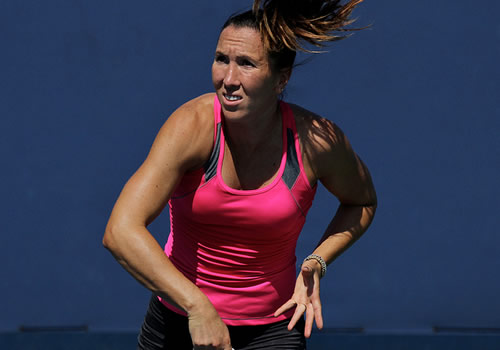 As befits a tournament with the status, prize money and points that the China Open has on offer, the Beijing Olympic Park if fast becoming a crucible of competition.

The tournament, which began life in 2004, was upgraded to Premier status in 2009, making it the fourth and final Premier Mandatory event of the season. With 1,000 points to the winner—aside from an eye-watering $860,000 first prize—it can be a game-changer for the last woman standing. The WTA Championships are just around the corner, and with a maximum of two lower-ranked events left to play, Beijing will be vital in sealing the last three places.

All but one of the eight quarter-finalists have either already qualified or are in serious contention for a place in Istanbul, and no fewer than four of them are former title winners in the Chinese capital.

Agnieszka Radwanska, already sure her place, won in 2011, and sailed into the quarters for the loss of just two games over Polona Hercog. She will next play Angelique Kerber, who is surging up the rankings during the Asian swing. She rose from 12 last week to No8 this, hot on the heels of the woman who beat her to the title in Tokyo last week, Petra Kvitova.

The Czech enjoyed a bye in the first round, and it is just as well. She reached the Bejing quarters the hard way via two three-set wins—and that on top of two three-setters in the semis and final of Tokyo.

Despite beating the still-to-qualify No6, Sara Errani, things do not get any easier for Kvitova. She now faces home heroine, Li Na, who at No5 has already qualified for Istanbul, is fresh, and will have the glorious 15,000-seat National Tennis Stadium at her bidding.

The winner between Kvitova and Li will play either Lucie Safarova or the 2008 Beijing winner, Jelena Jankovic.

The Serb is a scant 100 points behind Kerber, though at the start of 2013, few would have put Jankovic in contention for her first WTA Championships since 2010.

Her form slowly slipped during 2011 and 2012 to take her outside the top 20 for the first time since she held the No1 ranking at the start of 2009. But the year began with her first title in three years in Bogota and a semi finish at Miami took her back into the top 20. Another semi in Cincinnati took her to the No9 seeding at the US Open—where she was a finalist in 2008—and although she lost in the fourth round, she has managed to consolidate that position in the rankings in Asia.

Jankovic swamped the No12 seed, Carla Suarez Navarro, in the third round, a 6-0, 6-0, and has a strong chance of beating Safarova.

The Czech Safarova is undoubtedly enjoying some of the form of her life, though she has left her campaign for Istanbul too late: She will instead head to the Tournament of Champions in Sofia.

After a tawdry US Open Series, Safarova went on an eight-match run of wins, taking the Quebec title and reaching the quarters in Tokyo. Her gruelling schedule has not been helped by the length of her matches, and in Beijing, she had to overcome two tough opponents, Sam Stosur and Kaia Kanepi, before sealing a 6-4, 6-7, 7-6 win over Andrea Petkovic. She will surely be bone-weary against the fresh Jankovic when they take to court tomorrow—a good opportunity for the Serb and her Istanbul ambitions.

Jankovic has much in common with the other two who will contest the last semi place. Like her, Serena Williams and Caroline Wozniacki have tasted victory in Beijing and have also held the No1 ranking. And while Wozniacki is down at No13 in the race, she is fewer than 200 points behind Jankovic—and has already seen the other two women between her and Jankovic lose in Beijing. [The third, Marion Bartoli at No10, has retired from the tour.]

It means that if the Dane reaches the semis and the Serb does not, Wozniacki will overtake her. If Wozniacki reaches the final, she will also pass Kerber into the No8 spot.

Yes, Beijing is a game-changer. But while there is hope for Wozniacki, there is the small matter of Williams, who she has beaten only once in six meetings.

The Dane was champion in China in 2010, and arrived in Beijing with a semi finish last week in Tokyo. Williams, though, has been the powerhouse of the women’s tour for most the 2013 season—indeed since a first-round loss at last year’s French Open seemed to galvanize her and her tennis. Since then, she has put together a 118-6 win-loss record, taking Wimbledon, Stanford, Olympic gold, the US Open and the WTA Championships last year and, thus far, a career-best nine titles this year, including Roland Garros and her 17th Grand Slam in New York.

Ten years after she first won the Beijing title, she is clearly set on repeating, and has taken out former French Open champion Francesca Schiavone and then the 2005 Beijing champion, Maria Kirilenko, though she was made to fight back from breaks down in both of the 7-5-7-5 sets

As is so often the case with the mighty Serena, though, her run has notched up another milestone: her 70th match-win of the year: Her previous best was 58. She has lost only four.

Yet remarkable as that number is—and especially so at the age of 32 and in her 18th year on the pro tour—it puts her only fifth on the Open era list.

At the top of this particular table is Martina Hingis, who won the first of 43 titles at 16 and the first of five Grand Slams at just 17. Three times she won more than 70 matches in a season, all before she turned 22 and her temporary retirement for surgery. She was 18 when she completed her 71-match run in 1997 and 20 when she repeated in 1999. The next year, it was 77 wins. Some explanation, perhaps, of her subsequent ankle injuries.

And what of the fourth woman on the list? Well it happens to be one of the women who Williams meet in Beijing, one of those other China Open champions and former No1s: Jankovic.

In 2007, the Serb stacked up 28 tournaments—and for some context, Williams is playing her 18th in Beijing while one of the most prolific players, Radwanska, is playing her 22nd. Jankovic won four titles and reached the finals of four more—Beijing among them—to win 72 matches.

Jankovic has won 43 matches this year from 60 played, and will have to win three more to take the title. But she will also have to survive one of the toughest last-eight line-ups that Bejing could create: three Grand Slam champions, three former No1s and five women currently ranked above her in the top eight.

Should she survive, she will undoubtedly deserve that ticket for Istanbul.