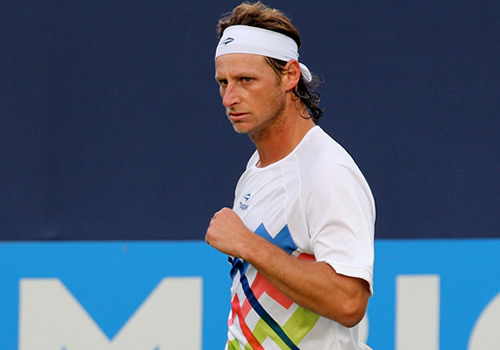 Perhaps it was written in the stars back in May when the charismatic David Nalbandian disappeared once again to undergo surgery.

For the 31-year-old Argentine—a Wimbledon finalist at the age of 20, a semi-finalist in the other three Grand Slams, champion at the Masters Cup in 2005 and multiple winner over Roger Federer and Rafael Nadal—had been through operations before and been sidelined by injury countless times.

This time, though, it sounded ominous from the start—two lots of surgery in one hit to right shoulder and right hip, and when he postponed a news conference last week, it simply delayed the inevitable. This week, ranked 231, he has decided to draw a line under the career of one of the most compelling tennis players the decade.

He cited his shoulder as the cause: “I can play matches, but my shoulder won’t let me continue my career. It’s tough because I have to announce my retirement from the sport that gave me so much. I’m very grateful.”

He will be sorely missed by tennis fans across the world and across the generations. For there has been a special something about Nalbandian that brought a smile to the face and a lift to the spirits whenever he played. That ‘something’ was one part personal charisma, one part patriotic fervour, and yet another part was his almost balletic multi-faceted talent.

It all started so well. He beat Federer to claim the US Open Junior title before going on to beat him in their first five tour matches: in Masters, on Federer’s home turf of Basel, and twice in Grand Slams in 2003. He reached the Wimbledon final the year before Federer won it, and achieved his biggest title, the Masters Cup, in a quite stunning five-sets, having lost the first two in tie-breaks.

Among his 11 titles, perhaps the most memorable were his back-to-back Masters in Madrid and Paris in 2007. In both, he beat Federer and Nadal, as well as Tomas Berdych, David Ferrer and Novak Djokovic along the way.

During 2008, he reached five more finals, scoring two titles, but it 2009 before that he met Nadal again, in a rivalry that was low on numbers but heavy on quality—and would become a great friendship.

In those two 2007 matches, Nadal had managed to win just three and four games respectively, and there was soon a buzz in Indian Wells when Nalbandian again went a set and a break up.

The Argentine’s tight, compact action and light footwork make tennis look deceptively easy. He enjoys taking the initiative, coming forward, striking the ball on the rise or out of the air or below the net. And he uses his skills with tactical intelligence, swinging the ball from one corner to the other, hitting ever wider, with more acute angle and spin, before picking off a floating return with a volley, or throwing in a drifting drop shot or leaping—literally—into a backhand winner.

In their 2009 contest, he had four match points on Nadal’s serve as well as one on his own: He had Nadal all but beaten for the third consecutive time. But few have been able to snatch defeat from the jaws of success as effectively as Nalbandian.

While fans enjoyed his athletic chess, his was always a demanding and energy-sapping formula. Without the fitness levels of a Nadal, it was tough to maintain. Nadal winkled out enough points to win the second set and, not for the first time, Nalbandian faded quickly in the decider.

A month later, Nalbandian faced a career-changing blow: hip surgery that took him out for the rest of the year. More injury setbacks saw him miss six straight Grand Slam tournaments until the 2010 US Open. Even so, he bumped into Nadal again, this time in Miami, and once again took the first set before losing in three.

He started 2011 with a fine win over Lleyton Hewitt in the first round of the Australian Open in a replay of one of the most memorable matches ever seen in Melbourne—the 2005 quarter-final that went Hewitt’s way, 10-8, in the fifth set. This time, as the clock ticked past 1am and four-and-three-quarter hours, it was Nalbandian who won, 9-7 in the fifth. But he was forced to retire from his second match and went under the knife again, this time for a groin injury.

He made his return on the summer grass but finished 2011 without a title for the first time since 2004. So he hit the comeback trail in 2012, and at Indian Wells, who should he draw but Nadal—though few thought he would reach a quarter-final face-off. But that was to underestimate the Argentine gifts. He did indeed win four matches, taking out the likes of Marin Cilic, Janko Tipsarevic and Jo-Wilfried Tsonga in the process. This time, though, Nadal won the first set—only for Nalbandian to level in the second but finally acquiesce, 4-6, in the third after two hours 40 minutes.

Memories are made of such matches, such rivalries, such shot-makers. 2012 would offer this fan two more chances to soak up the Nalbandian vibe, now all the more valued in the light of this week’s news.

The first was in Rome where the Argentine, still outside the seedings, again drew a Goliath, Andy Murray, in the second round.

Murray played near-perfect tennis to take the first set 6-1, but that was just the start of match coloured by brilliant tactical rallies of guile and variety through its entire two and a half hours.

Nalbandian broke at 5-4 in the second set with a tennis masterclass—now a soft forehand slice played short, now pushing Murray wide to ghost into the net, finally outmanoeuvring the younger, taller man to force the error. And he was the first to break in the third to the delight of an entranced crowd. But Murray levelled and broke at the last to win, 7-5.

Weeks later, it was Queen’s. The tournament, and Nalbandian’s part in it, will always be tainted by the red mist that descended on the Argentine as he was broken by Cilic in the second set of the final. Already a set up, Nalbandian raced after a ball, lost the point, and kicked a board surrounding the line-judge’s chair, drawing blood.

He was disqualified on the spot, missing the chance to win his first ever grass title in his first grass final since bursting onto the tennis stage at Wimbledon in 2002.

He clearly did not intend injury, as the referee afterwards conceded, but this hugely gifted man has as often been the victim of his own undoing as of the stars.

Queen’s was one such occasion. A peculiar change of tactics as he served for the match against Nadal in Indian Wells in 2009 was another. And perhaps a less-than-100 percent work ethic away from tennis was the most damaging—though nothing ever prevented him from throwing body and soul into one special campaign: the pursuit of the Davis Cup.

Nalbandian’s final appearance is to be an exhibition match against, appropriately, Nadal on 23 November in Buenos Aires. This fan’s final memory, though, is rooted in Queen’s—but not that final match.

It was late, on an outside court, where most of his matches had been consigned in a rain-affected week. Despite the hour, the court was packed and, as is the way with fans watching tennis, comments drifted between neighbours: “I just love David’s tennis.”

Yes, he may have retired without a Grand Slam and without the Davis Cup, but he played a beautiful game of tennis.

And for proof, check out his match against Federer at the Masters Cup or his defeat of Nadal at the Paris Masters.