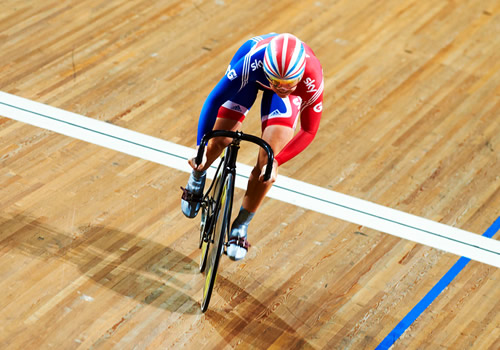 Kenny eased through the qualifying rounds but lost to Germany’s Robert Forstemann in the semi-finals.

But he recovered to edge out German world champion Stefan Botticher in two straight races in the battle for bronze.

However, it was not without controversy – Botticher was relegated for encroaching on Kenny’s racing line after taking the honours in their second race.

Varnish – a bronze medallist with Becky James in the women’s team sprint on Friday – progressed to the semi-finals at the expense of fellow Brit Victoria Williamson.

But she lost to Holland’s Elis Ligtlee before recovering to beat France’s Virginie Cueff to claim another third place.

Double Olympic champion Laura Trott sits third in the women’s omnium standings at the halfway point, after finishing third in the elimination race and flying lap and second in the points race.

But the top three – including Holland’s Kirsten Wild and Belgium’s Jolien D’Hoore – are separated by just two points coming into the final three events on Sunday.

Meanwhile, Great Britain’s Sam Harrison sits sixth in the men’s omnium standings. He was in the podium places after a second on the flying lap and third in the points race but dropped down after a 16th in the elimination race.