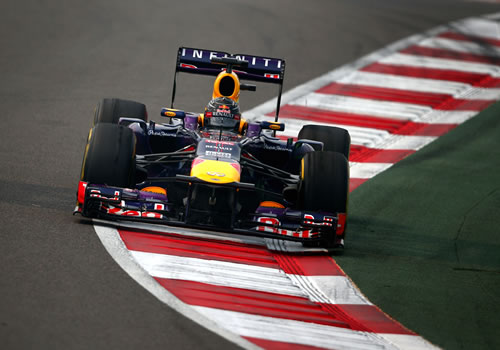 Sebastian Vettel secured his place in the pantheon of Formula 1 legends as he secured a fourth consecutive world drivers’ title with a commanding victory in India.

Vettel and Red Bull have dominated this season and this victory – by a big 20 second margin – was achieved in the same way.

He was quickest in practice, quickest in qualifying and led from lights to flag just to underline his total authority over the rest.

“You’ve done it in style, you join the greats,” his pit team told him as he took the chequered flag – and few could argue.

And, worryingly for his rivals, is Vettel is likely to just get better – with fellow German Michael Schumacher’s seven titles surely in his long-term sights.

After all, legends of the sport Alain Prost and Juan Manuel Fangio, also four-time world champions, hadn’t even won a race when they were 26 – the age Vettel is now.

In addition, Red Bull also secured the constructors’ title at the Buddh International circuit, joining the fabled F1 names of McLaren and Ferrari as a four-time consecutive winners.

“It’s amazing, it looked good coming in to the race but you’ve never done it until you’ve done it,” said Red Bull chief technical officer Adrian Newey.
“We did it in style from the front and it feels incredible for all of us.

“I just hope Seb gets the recognition he deserves now. He’s done a fantastic job all season, he’s been so consistent and so smooth, he’s never asked too much of the car and it’s just a total pleasure to work with him.”

It was Vettel’s day – just as it has been his season – but behind him Nico Rosberg took second for Mercedes and Roman Grosjean’s Lotus completed the podium – making amends for a tyre selection shocker during Saturday’s qualifying.

Fernando Alonso, Vettel’s closest title challenger, finished outside the points in 11th after a first lap collision ruined his race strategy, while Lewis Hamilton, who struggled with his tyres in the closing stages of the race, was the top British finisher in sixth.