Indian Grand Prix 2013: What lessons did we learn as Sebastian Vettel clinched a fourth straight world title on Sunday? 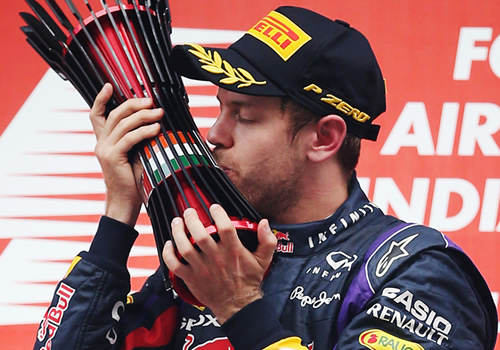 Vettel will only get better – if Newey stays at Red Bull

Only four people have won four F1 world drivers’ titles and each is a legend – Alain Prost, Juan Manuel Fangio and Michael Schumacher. The key difference is that Sebastian Vettel is just 26 – an age at which neither Prost or Fangio had even won their first Grand Prix. In addition, Vettel’s partnership with Red Bull’s chief technical officer Adrian Newey is only going to get stronger and cement his possession of dominance in the sport. It has been rumoured that Newey might be tempted to get involved with an America’s Cup campaign after he admitted that, at 54, he was restless for a new challenge. But Newey won’t be hanging up his 4B pencil and draughtboard just yet – much to Vettel’s relief – because he has confirmed to Red Bull team chief Christian Horner his commitment to mastering F1’s new regulations for next season, including the incorporation of V6 turbos and associated hybrid technologies.
Newey has so much more to achieve in F1 – as has Vettel.

Raikkonen and Alonso. Who is bothered to fight for second?

An interesting sub-plot to the race in the Lotus garage. Romain Grosjean had the better of team-mate Kimi Raikkonen in Japan and did so again in India. There are whispers that Raikkonen is already looking to the 2014 season with Ferrari and that means the battle for second place in the drivers’ standings (Fernando Alonso is currently 24 points ahead of the Finn with four races remaining) might not be that exciting. Is Raikkonen motivated to finish his Lotus career on a high? In contrast, the same can’t be said of Alonso. He wants to finish the year strongly, wants Ferrari to edge past Mercedes in the constructors’ standing and was unlucky in India, after a first lap collision ruined his strategy.

Races ahead could be crucial in deciding 2014 driver line-ups

McLaren, Force India, Sauber, Williams, Caterham and Marussia have all to finalise their line-ups for 2014 – and that could be the big talking point of the final Grands Prix of the year. Paul Di Resta’s seventh place might help his future at Force India while Sauber’s Nico Hulkenberg – who recently delivered potential suitors Lotus an ultimatum that he wanted his F1 future sorted by the end of the month – failed to finish. Ferrari’s Felipe Massa and McLaren’s Sergio Perez are also looking to put themselves in the shop window and fourth and fifth place did just that. With much else decided, thoughts are already turning to the New Year.