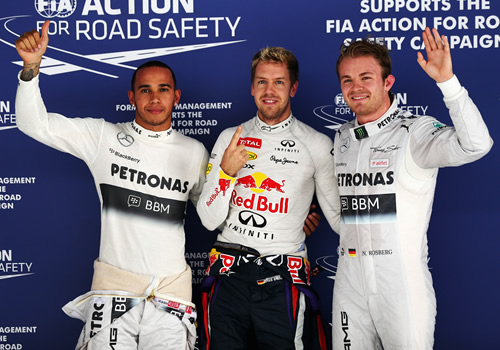 Sebastian Vettel is on the verge of his fourth straight title Photo: Getty Images/Red Bull Racing

Vettel, who hopes to wrap up a fourth consecutive world drivers’ title on Sunday, clocked the fastest lap ever at the Buddh International circuit after a bold call from his pit team.

Vettel, on soft tyres, took nearly two seconds off the previous best when he flashed across the line in 1:24.119.

Team principle Christian Horner later claimed his drivers were the architects of the split tyre strategy and hailed Webber’s performance in qualifying so well on medium compound tyres.

“think in the end, if everybody does his bit it probably doesn’t matter so much. It’s a great result for the team, we’ll see what the result is tomorrow.”

So Vettel now stands on the verge of securing his place among the pantheon of F1 legends in Sunday’s Grand Prix – and is looking to do so in signature style.

He was fastest in every practice session, seized pole position and will now look to lead from lights-to-flag to underline his dominance.

“We have been pushing and we wanted to get a great result this weekend. I was surprised to be where we are.”

Fernando Alonso, the only man who can pip Vettel to a world title – though it requires an unprecedented mathematical and sporting miracle – will start from eighth and Jenson Button endured a qualifying horror show, starting in tenth.