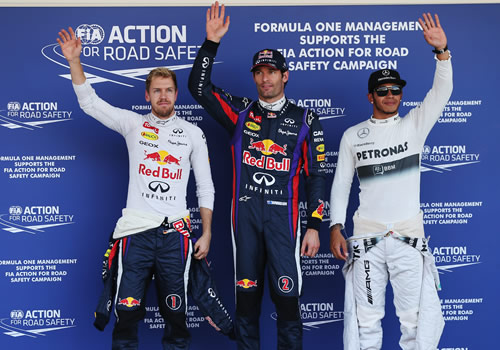 Vettel, who could clinch a fourth consecutive drivers’ title this weekend, suffered a Kers power-boost system failure, which proved decisive in his battle for a career 43rd pole position.

Lewis Hamilton will start from third on the grid, just ahead of Lotus’s Romain Grosjean.

But there was better news for Vettel in the performance of closest title rival, Ferrari’s Fernando Alonso. He ranked eighth after a poor qualifying performance.

He needs to maintain or better that position in tomorrow’s race to keep the title alive, should Vettel win his 35th Grand Prix.

“It’s a great track and we all love driving here. The laps weren’t too bad but you always want a little bit more. It was pretty good,” said Webber, who is quitting F1 this season to switch to driving a Porsche in the endurance racing circuit.

“Sebastian had a problem so a little bit of a hollow result. But happy to be on pole and you’ve got to grab the opportunity when you can.”

Vettel though refused to blame technology for his performance – insisting he was confident all would come good on Sunday.

“The car was phenomenal and you don’t get many days like that when the car feels great and you can really push it to the limit,” he said.

“We did have a problem but I am not a big fan of this, ‘without this, with this’, it is always an unknown.”

Alonso also insisted he had no complaints about his display, in a qualifying session dedicated to the memory of fellow Spaniard and Formula 1 reserve racing driver Maria De Villota – who died from natural causes in Seville on Friday.

“Yesterday was a shock, we do practice, you take the helmet off and they tell you this terrible news, you never expect this, especially with her she fought so much this last year and she was full of life,” he said.

“I’m not surprised with my position, it’s not been a good week but I need to do better in the race obviously.

“I was more or less I was eighth, ninth all weekend so it is not unexpected.”