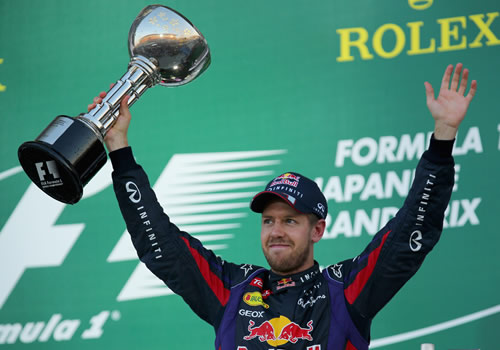 Sebastian Vettel’s wait for a fourth straight Formula 1 world title continues – but he edged ever closer with a victory at the Japanese Grand Prix.

Vettel clearly loves Suzuka and of his 35 career wins, four in five years have come on this track, where the fanatical supporters treat him as one of their own.

Romain Grosjean stamped his authority of the race, the Lotus driver making a flying start to surge from fourth to first on the grid.

Vettel, despite his far from smooth start to the race, slowly started to impose himself, overtaking Grosjean with 12 laps remaining before nursing his tyres to his ninth chequered flag of the season.

“You’re the best team in the world, thanks a lot for bringing the car home, thanks boys. I love you,” Vettel told his pit crew over race radio.

And despite a valiant attempt Grosjean could not hold off the Red Bull charge, Mark Webber passing him to take second with just one lap to go.

But there was disappointment for Lewis Hamilton, who had started the race from third on the grid.

He suffered a first-lap puncture and the Mercedes driver was running last when he finally retired – his team saying data was showing abnormal readings and high rear brake temperatures.

“My guys worked so hard for this and I feel really sorry for them, it’s a shame,” he said.

“I had the best start I have had all year – such a good feeling, so really disappointed but that’s life.”