Japanese Grand Prix 2013: Sebastian Vettel is determined not to get ahead of himself in his quest after victory in Suzuka 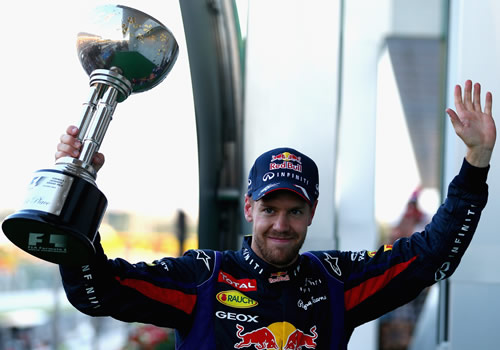 Sebastian Vettel is determined not to get ahead of himself in his quest for the Formula 1 world title after claiming his fifth consecutive race win in Japan.

Vettel recovered from a stuttering start to take the chequered flag in Suzuka for the fourth time in five years – meaning he now enjoys all but impregnable 92-point championship lead over Ferrari’s Fernando Alonso.

He also becomes only the sixth driver in history to win five consecutive races, following in the footsteps of Alberto Ascari, Michael Schumacher, Jack Brabham, Nigel Mansell and Jim Clark.

However, this was no procession. Lotus driver Romain Grosjean made it a gripping race with a surging start and was only decisively overtaken by Germany’s Vettel 12 laps from home.

He went on to finish third after Vettel’s Red Bull team-mate Mark Webber claimed second on the penultimate lap.

“I had a very poor start, I clipped my front wing and Lewis had a puncture, but after that I looked after the tyres and had incredible pace, so overall it’s fantastic. I’m so overwhelmed, I’ve won here four times now, which is incredible.

“As for the championship we have a good gap, so we’ll still keep pushing. It looks good at this stage, but it’s not over until it’s over.”

Webber, who retires from F1 this season to move into endurance racing, admitted frustration with tactics as Red Bull claimed a 1-2 for only the second time this season, claiming that team orders were switched from a two to three stop strategy midway through the race.

“The race was pretty good, although I’d like one more step on the podium,” said Webber.

“Seb went longer in his first stint, and that made the difference, but I’m pretty happy with second. I got the best out of what I could.

“It was the best I could do under the circumstances. It was more of a risk going for the three stops to push Romain. Even after my first stop I was having a two-stop but midway through we changed to a three-stop so we had to give it a go and then I ran out of laps.”

Vettel should now clinch the drivers’ title in Delhi later this month – but Red Bull team principle Christian Horner still doesn’t think he has had credit for his performances in recent weeks.

“Sebastian continues to improve and improve. I don’t think he gets the credit he deserves,” he said.

“He’s going up against one of the strongest eras in the sport and a really tough team-mate. I think he’s driving sublimely at the moment.”
And Alonso, who finished fourth, also claims the season is over.

“I don’t think so even if Sebastian retires in all four races I need to win them all but we are struggling a bit at the moment,” he admitted.

We will continue to give our all in every race though and then if he wins it, I’ll shake his hand.”