Japanese Grand Prix 2013: What lessons did we learn as Sebastian Vettel took another step towards the title with victory? 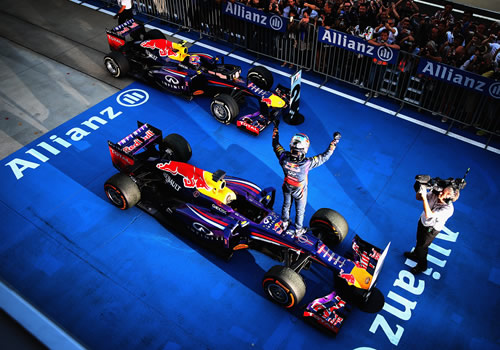 Just a matter of time for Vettel

Sebastian Vettel’s wait for the drivers’ title goes on but surely not for long. He was safety first off the track – reportedly shunning Japan’s local sushi cuisine for fear that it could have been contaminated by the leak at the Fukushima nuclear plant. And he adopted a similar tactics on the track, his stuttering start making his life difficult in a race that could have been processional but turned out to be a gripping watch. Overall, it was an exceptional performance. Red Bull have a clear advantage over the rest of the cars with their speed and Vettel seems to an equally clear advantage over team-mate Mark Webber. What’s he going to do when he gets to India, worry about Delhi Belly? Of course, he was imperious there last year – claiming pole position and the race and he now leads the championship by 92 points with just 100 available.

Romain Grosjean led so much of the grand prix, fending off the challenge of Red Bull until finally surrendering in the final few laps. A cycling fan, the French driver will know all about the combative award, given to Tour de France riders who don’t win but make a race through their performance. He certainly deserves a similar prize for this display but the wait for a first career race Grand Prix win goes on. As his team said on Twitter – after he was passed late on – ‘damn and blast’.

And feel a little sorry for Hamilton and his Mercedes

Poor old Lewis Hamilton – he finally gets a decent start and then he suffers a puncture. He was right about one thing though. He said pre-race that would be ‘almost impossible’ to beat the Red Bulls. Indeed, Vettel and Webber’s one-two was only their second of the season – the other being in Malaysia and we all know what happened there.