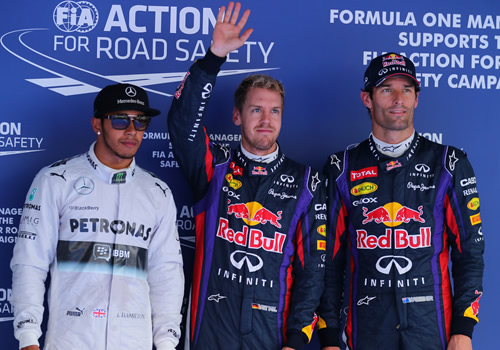 Sebastian Vettel took pole position with ease for the Korean Grand Prix at Yeongam ahead of Mercedes’ Lewis Hamilton to seal his fourth consecutive pole.

The German was more than two-hundredths of a second quicker than Hamilton – and it will be the fifth time this season that the pair will share the front row.

Red Bull’s Mark Webber put in a solid performance to qualify third but will start from 13th due to his reprimand at Singapore for accepting a lift back to the pits from Fernando Alonso.

The Ferraris struggled for pace and will start from fifth and sixth, with Fernando Alonso out-qualifying Felipe Massa.

Despite being quickest in Q1, Kimi Raikkonen struggled throughout the rest of the session and could only manage to put his Lotus ninth on the grid.

There was disappointment for team McLaren after both drivers failed to make it through to Q3 – Sergio Perez will start from 10th ahead of Jenson Button in 11th.

Paul Di Resta breathed a sigh of relief when he scraped through Q1 into the next session but failed to progress further and will start from 15th place.

Force India have lodged a complaint against Jules Bianchi after they felt the Marussia driver blocked Di Resta on his final lap of Q1.

Both Williams’ drivers failed to make it through Q1 for the fourth time this season and will start from 17th and 18th position.